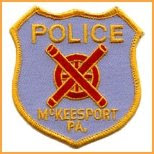 [1994] ...A former McKeesport police officer, already in jail for violating a protection from abuse petition filed by his ex-girlfriend, was charged yesterday with trying to hire a former partner to kill the woman... [2008] ...A surveillance camera captured Officer Dixon pointing the gun into the cell...

OFFICER CHARGED IN DEATH THREAT
Accused of pointing gun at jailed suspect
Pittsburgh Post Gazette, PA
By Daniel Malloy dmalloy@post-gazette.com
and Jim McKinnon jmckinnon@post-gazette.com
Tuesday, September 30, 2008
A veteran McKeesport police officer was arrested and charged yesterday with threatening the life of a prisoner and pointing a gun at him. Theodore R. Dixon Jr., 55, was placed on administrative leave by Police Chief Joseph Pero... charged with simple assault, terroristic threats, reckless endangerment and official oppression. Early Saturday morning, shots were fired through Officer Dixon's living room window while his wife and child were inside the house. Though no suspects were named, Officer Dixon became convinced that the attack was related to Sakarr Bray... telling other officers that "someone was gonna die." Upon returning to the police station, Officer Dixon pointed his service revolver into Mr. Bray's holding cell. Mr. Bray told investigators that Officer Dixon said, "I should kill you right now. I'm going to handle this my way. I'm gonna kill you and your brother. You tell your mom I'm gonna kill both of you all." A surveillance camera captured Officer Dixon pointing the gun into the cell and Mr. Bray backing up with his hands in the air... Officer Dixon, a former lieutenant who ran unsuccessfully for district judge last year against Judge Riazzi, was dismissed from the McKeesport Police Department in February 1994 for violating a protection-from-abuse order obtained by his ex-girlfriend... Officer Dixon also was accused in July 1994 of asking a fellow police officer to kill Ms. [P.C.]. But the district attorney dismissed those charges in April 1995 because two key witnesses could not be found... [Full article here]

EX-OFFICER ACCUSED OF TRYING TO HAVE GIRLFRIEND KILLED
Pittsburgh Post-Gazette (PA)
Author: JIM MCKINNON
July 27, 1994
A former McKeesport police officer, already in jail for violating a protection from abuse petition filed by his ex-girlfriend, was charged yesterday with trying to hire a former partner to kill the woman. Theodore Dixon, 41, was arraigned yesterday... Dixon's former partner... Dixon has been in the County Jail since June 3, when Common Pleas Judge Jeffrey A. Manning revoked his bail for violating, for the third time, the court order to stay away from [P.C.]... Dixon told him that he needed someone to "take out" [P.C.], according to an affidavit of probable cause... He made arrangements through another friend for Wilson to obtain a gun, a photograph of [P.C.] and the floor plan of her apartment. On June 29, Wilson told police, Dixon's new girlfriend called him, saying Dixon wanted to know "what was taking him so long"... Dixon was fired from the force in February for violating the court order to stay away from [P.C.].

FORMER OFFICER ACQUITTED OF ASSAULTING EX-GIRLFRIEND
Pittsburgh Post-Gazette (PA)
JAN ACKERMAN
October 20, 1994
When they met, Theodore Dixon Jr. was a McKeesport police officer and [P.C.] was a detective for the Ames Department Store in McKeesport... Yesterday, a jury that heard evidence that Dixon assaulted [P.C.] Dec. 30 at McKeesport's Riverfront Park acquitted him on charges of simple assault and reckless endangerment, both misdemeanors. She said he slammed her face into the steering wheel of her car. He said he wasn't even with her that day. Jury foreman Anthony Daw of Munhall said the jury didn't understand why [P.C.], who had been trained in criminal justice, didn't go to a hospital immediately and why it took her so long to report the incident. She testified that she didn't have health insurance. Despite the jury's verdicts, Common Pleas Judge Jeffrey A. Manning, who oversaw the case, found Dixon guilty of harassment, a summary offense. The judge sentenced him to 90 days in jail, but released him immediately because Dixon had already served four months in jail... Dixon is awaiting trial on charges of trying to hire his former police partner, Javan Wilson III, to kill [P.C.], 32, who is in hiding...

HOMICIDE CHARGE DROPPED AGAINST EX- POLICE OFFICER
Pittsburgh Post-Gazette (PA)
Jan Ackerman
April 4, 1995
A former McKeesport police officer won't be prosecuted on charges he tried to hire someone to kill his former girlfriend because two key witnesses cannot be found. The district attorney's office yesterday dismissed a charge of solicitation to commit homicide against Theodore Dixon, 41, of Centennial Street... One of the missing witnesses is former McKeesport police officer Javon Wilson III, who told county detectives that Dixon asked him to kill [P.C.]... Dixon plans to try to get his job back with the McKeesport police. Dixon's status with the department is unclear. Patberg said Dixon has been suspended from the force, but former McKeesport police Chief Dwayne Senay said in the fall that Dixon was fired in February 1994... He intends to sue [P.C.] and the city of McKeesport...