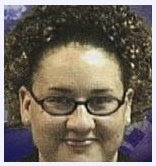 ...According to the Denver Post, McAlexander faced weapons charges in 2006 after firing at a television and at the walls of her home in Adams County. Like last week's incident, McAlexander was reportedly suicidal at the time...

There are more ways to help someone than put them back on the job. Maybe every state should have a special division for retraining resigned officers and helping them find a less stressful, unarmed new job.

ATTEMPTED MURDER CHARGES DROPPED AGAINST POLICE WOMAN WHO FIRED AT OFFICERS
But aggravated assault charges remain.
Rapid City Journal
Wednesday, April 29, 2009
A Denver woman who shot at Custer sheriff's deputies and a state Highway Patrol officer who were checking on her well-being will not face attempted murder charges. Kachina McAlexander, 31, a 10-year veteran of the Denver Police Department, still faces three charges of aggravated assault against law enforcement, a felony carrying a steeper penalty... McAlexander was originally charged with three counts of attempted second-degree murder and the alternate counts of aggravated assault against law enforcement after an incident at a Custer motel in late March. The attempted murder charges were eliminated at a hearing this week before 7th Circuit Magistrate Judge Mark Marshall. Officers were summoned to the hotel after learning that McAlexander could be suicidal. When they arrived, McAlexander allegedly fired shots at the officers... [Custer County State's Attorney Tracey] Kelley said McAlexander has committed a crime and must be held accountable. McAlexander's next court appearance is a June 4 arraignment on aggravated assault charges. She remains free on a $50,000 bond. [Full article here]

EARLIER ARTICLES: PSYCHOLOGIST CLEARS DENVER OFFICER TO LEAVE JAIL
9NEWS
posted by: Jeffrey Wolf written by: Kyle Clark
Apr 1, 2009
SIOUX FALLS, S.D. - A Denver Police officer accused of shooting at other officers during a suicidal episode is not dangerous, according to a psychologist. Thirty-one-year-old Officer Kachina McAlexander of Aurora, a 10-year Denver Police veteran, is on unpaid leave from her job... charged with three counts of attempted second-degree murder and three alternate counts of aggravated assault. Authorities say Highway Patrol Trooper Todd Albertson and Custer County deputies Frank Kistler and Derek Booker found McAlexander with a gun in her hand and she fired several times at them. No one was hit... The psychologist, Dr. Dewey Ertz, "did not believe she was an imminent danger to herself or others," said state's attorney Tracey Kelley. If McAlexander posts bond, said Kelley, she must sign extradition papers ensuring she can be brought back to South Dakota for trial. The conditions of the bond also require McAlexander to maintain contact with mental health professionals and avoid alcohol and weapons... According to the Denver Post, McAlexander faced weapons charges in 2006 after firing at a television and at the walls of her home in Adams County. Like last week's incident, McAlexander was reportedly suicidal at the time. A judge acquitted McAlexander of the charges and an appeal by prosecutors was not successful. A spokesperson for the Adams County District Attorney would not provide information on the case to 9NEWS saying the case information is sealed. Denver Police are processing a request by 9NEWS to review McAlexander's disciplinary file... According to the affidavit, McAlexander told investigators she realized the men outside her hotel room were law enforcement officers before she started shooting... In addition to her police work, McAlexander, who lives in Aurora, sells real estate in the Denver metro area. Sterling Real Estate Group managing broker Rich Klapt said McAlexander has worked for the company as an independent contractor for several years. [Full article here]

FAMILY: DENVER OFFICER INNOCENT OF ATTEMPTED MURDER 9news
posted by: Jeffrey Wolf written by: Kyle Clark
Apr 4, 2009
SIOUX FALLS, S.D. - Kachina McAlexander has posted bond and left a South Dakota jail where she was being held after a shootout with local deputies. Authorities say McAlexander, a 10-year Denver Police veteran, shot at other officers who came to a motel in Custer on March 24 responding to a report that McAlexander might be suicidal. McAlexander's family offered their first public comments in the form of a telephone answering machine message Friday. "She's doing pretty good. She's in good spirits," McAlexander's mother says on the recording. "She wanted me to just let you guys know that she is innocent and she will get through and don't worry"... [Full article here]
on 4/29/2009