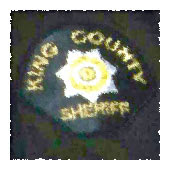 ..."Is the jury telling us they didn't believe the five deputies who came forward voluntarily and testified against Bonnar under oath?" Or maybe they're just telling us that this sort of conduct is OK in King County"...
Sheriff's Spokesman Sgt. John Urquhart
I really try to stay with only domestic-related posts but the issue of accountability can't be separated from what this blog is about.

IT IS NO SMALL THING for law enforcement officers to find themselves testifying against "one of their own." But when FIVE of them take that step and are not believed - it helps us to understand why sometimes they might decide to not bother. The Sheriff of King County stands behind these deputies testifying, and I hope the public does too.

To the five: Thank you.

DEPUTY CLEARED ON ALL COUNTS IN CIVIL RIGHTS VIOLATION CASE
Seattle Post Intelligencer
By Hector Castro and Levi Pulkkinen
December 23, 2008 10:45 p.m. PT
[EXCERPTS] A King County sheriff's deputy accused of assaulting a handcuffed woman [Irene Damon] was acquitted on all counts against him Tuesday by a federal jury in Seattle... [Deputy Brian J.] Bonnar's co-workers, including other deputies, testified that after Damon calmed down, Bonnar looked around and twice dropped his knee on Damon's face, near her eye. One deputy testified that Bonnar lifted Damon from the ground by grabbing her hair, and later slammed her face against the patrol car. In a statement issued Tuesday, Sheriff Sue Rahr stood by the officers who came forward to testify against him, and her office's initial decision to issue Bonnar a 20-day suspension... "What happened here was not what we expect of our law enforcement officers," [U.S. District Judge Thomas] Zilly said. "There was a substantial amount of evidence that (Bonnar) did not meet the standard for law enforcement in our communit"... [Full article here]
on 12/24/2008