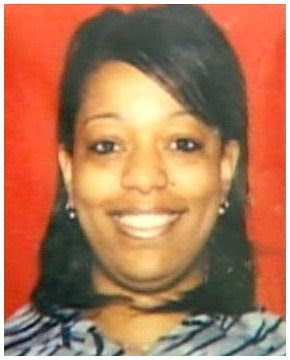 ...She warned police that Stewart was armed and was "an ex-police officer," the documents say... Dawn Stewart worked for the National Rifle Association and was the mother of five children. Family members said she had grown to fear for her safety because of problems with her husband and had intended to move out of the couple's home on Monday...

JULY 2010 UPDATE:
Antonio Stewart was sentenced to 50 years in prison - 30 years for the murder and a consecutive 20-year term for using a gun to commit a crime of violence.

A woman killed Sunday night in Northeast Baltimore was planning to leave her husband - with her belongings and divorce papers ready to go, according to charging documents in the case.

The documents detail a gruesome scene after members of the city police SWAT team rushed the home: Antonio Girard Stewart, 29, was found unconscious on the back porch of a neighboring home and dangling from his neck by a belt, still clutching a handgun in his left hand. Lying at the bottom of the basement stairwell was Dawn Williams-Stewart, shot in the stomach.

The incident began about 8:35 p.m., when police received a call for a domestic dispute at Bel Air Road and Parkside Drive. The first officer on the scene was met by Williams-Stewart's daughter, Litia Land, who said her mother was attempting to move out of their home in the 4000 block of Parkside Drive.

She warned police that Stewart was armed and was "an ex-police officer," the documents say. Officers heard numerous gunshots coming from the home's basement as they made entry and quickly withdrew from the scene. The city's SWAT team assumed command of the situation and entered the home at 11:15 p.m.

Williams-Stewart was pronounced dead a half-hour later; Stewart was treated at the scene and taken to Johns Hopkins Hospital. He was charged with first-degree murder Monday and ordered held without bond.

Police could not confirm whether Stewart had a background in law enforcement, but court records indicate he has worked as a security guard and has a criminal record in Baltimore City and Baltimore County dating to 2003. [LINK]

POLICE: MAN KILLS WIFE IN BARRICADE SITUATION
WBALTV
December 1, 2008
[Excerpt] ...[Detective Donny] Moses said the couple had two "very young children" together. The kids had been sent out of the house before police entered. Antonio Stewart was taken to an area hospital. His condition was unknown early Monday morning.Dawn Stewart worked for the National Rifle Association and was the mother of five children. Family members said she had grown to fear for her safety because of problems with her husband and had intended to move out of the couple's home on Monday. [Full article here]

MURDER INK
City Paper
By Anna Ditkoff |
Posted 12/3/2008
Murders This Week: 8
...Dawn Marie Williams-Stewart
Sunday, Nov. 30, 2008: [Excerpt] ...8:30 p.m. A police officer went to the home of Dawn Williams-Stewart and her husband in the 4000 block of Parkside Drive near Herring Run Park for an assault call. The officer heard arguing inside the house. He kicked in the door to get inside, but heard gunshots and had to retreat. The arguing inside continued and the husband barricaded himself in the house, holding Williams-Stewart, a 41-year-old African-American woman, hostage. At 11:50 p.m. a SWAT team entered the house and found Williams-Stewart shot to death. They also discovered her husband on the back porch hanging from a belt. According to police, there was a gun in his hand, and he was unconscious but still alive. He was taken to a hospital and will be charged with his wife's murder once he is released. At least 20 people have been murdered as a result of child abuse or domestic violence this year... [Original]
[POLICE OFFICER INVOLVED PERPETRATED DOMESTIC VIOLENCE LAW ENFORCEMENT MURDER MARYLAND STATE FATALITY FATALITIES BREAKING UP LEAVING ]
on 12/05/2008