[NY] Officer Lewis arrested 4th time - (How much will it take?) 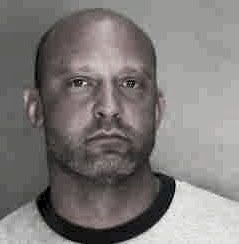 ...This is Lewis’ fourth arrest in the last eight months. Lewis was charged last month with misdemeanors of third-degree stalking and second-degree aggravated harassment for allegedly threatening his former wife a total of four times in August and November...

I don't need to say a thing, right?

SCHENECTADY POLICE OFFICER ARRESTED AGAIN
Capital News 9, NY
Monday, December 29, 2008
SCHENECTADY, N.Y. -- A Schenectady police officer already charged in connection with a domestic dispute has been arrested again following a car accident over the weekend. John Lewis, 38, of Schenectady is charged with driving while intoxicated, aggravated driving while intoxicated, improper speed, and improper lane use. He was arraigned on Saturday and released on his own recognizance. He has been suspended without pay for 30 days... HE WAS ARRESTED IN NOVEMBER ON STEMMING FROM AN INCIDENT WITH HIS WIFE. HE WAS STALKING AND AGGRAVATED HARASSMENT CHARGESALSO CHARGED WITH HARASSMENT EARLIER THIS YEAR IN A SEPARATE INCIDENT WITH HIS WIFE. Lewis was also fired 10 years ago after using a racial slur but was later reinstated. [Full article here]

SCHENECTADY POLICE OFFICER CHARGED WITH DWI
Embattled Schenectady police officer charged with DWI
Schenectady Gazette, NY
By Michael Goot
Monday, December 29, 2008
...Department spokesman Officer Kevin Green said Lewis hit a parked car in the area of 1052 Eastern Ave. at 4:26 a.m. Lewis has been charged with two misdemeanor charges of operating a motor vehicle while intoxicated and aggravated driving while intoxicated for allegedly having a blood alcohol content of greater than 0.18 percent. He also was issued two violation tickets for imprudent speed and improper lane use. This is Lewis’ fourth arrest in the last eight months. LEWIS WAS CHARGED LAST MONTH WITH MISDEMEANORS OF THIRD-DEGREE STALKING AND SECOND-DEGREE AGGRAVATED HARASSMENT FOR ALLEGEDLY THREATENING HIS FORMER WIFE A TOTAL OF FOUR TIMES IN AUGUST AND NOVEMBER.
COURT PAPERS ALLEGE THAT LEWIS SAID IF HE FOUND HIS EX-WIFE WITH SOMEONE, HE WAS GOING TO KILL WHOEVER SHE WAS WITH AND HER.
THAT CASE IS PENDING. LEWIS’ DIVORCE BECAME FINAL IN LATE SEPTEMBER. HE ALSO HAS ANOTHER PENDING CONTEMPT CASE FOR ALLEGEDLY VIOLATING AN ORDER OF PROTECTION BY CALLING HIS FORMER WIFE SEVERAL TIMES. HE WAS ACQUITTED IN JUNE OF A VIOLATION HARASSMENT CHARGE, WHICH STEMMED FROM ALLEGATIONS THAT HE GRABBED AND PUSHED HIS WIFE IN A DISPUTE OVER THEIR CHILD. Lewis has been suspended without pay for 30 days after each arrest. He was then returned to the payroll but did not return to work. Green said Lewis was suspended without pay for 30 days as a result of the most recent incident. LEWIS ALSO HAS FILED A NOTICE OF CLAIM AGAINST THE CITY. HE ALLEGES THAT THE POLICE COLLABORATED WITH HIS EX-WIFE TO FORCE HIM FROM HIS JOB AND EMBARRASS HIM... Lewis’ attorney Kevin Luibrand said previously that his client has gone on disability for an undisclosed ailment. Police union President Lt. Robert Hamilton did not return a call seeking comment. [Full article here]

SCHENECTADY COP ARRESTED YET AGAIN
Albany Times Union, NY
Monday, December 29, 2008
SCHENECTADY - A city cop already facing charges for allegedly stalking his wife, has been charged with drunken driving after a automobile accident in the city, police said. Detectives from internal affairs arrested 38-year-old John Lewis on Saturday, charging him with driving while intoxicated, aggravated driving while intoxicated, speeding and improper lane use. Lewis has been suspended without pay for 30 days while the department proceeds with its case against him. Lewis was arrested and suspended without pay for 30 days in early November after allegedly stalking and threatening his wife and "whoever she was with." In that case, LEWIS IS CHARGED WITH THIRD-DEGREE STALKING AND SECOND-DEGREE AGGRAVATED HARASSMENT FOR ALLEGEDLY THREATENING ALISON LEWIS IN PERSON AND ON THE TELEPHONE, according to the city court document. LEWIS WAS RELEASED WITHOUT BAIL AFTER HIS ARREST IN THAT CASE. THE COURT COMPLAINT SAYS LEWIS ALLEGEDLY TOLD HIS EX-WIFE HE WOULD "KILL WHOEVER SHE WAS WITH AND KILL HER" AND THAT HE WAS "NEVER GOING TO LET HER GO AND HE WAS NEVER GOING TO LET HER BE WITH ANYONE ELSE." Alison Lewis asked for an order of protection against her ex-husband. Those arrests are just the latest controversy for Lewis... [Full article here]
on 12/29/2008