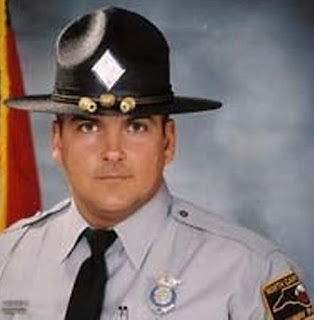 ...A THIRD PERSON WAS IN THE HOME DURING THE SHOOTING... GRISSOM IS NOT FACING ANY CHARGES... "I MEAN I JUST SHOT THIS GUY ON MY BACK DECK. HE JUST COME HERE AND BEAT ME IN THE HEAD"...

Man held in assault on his girlfriend Man shot at trooper's home is in critical condition
News & Record
December 24, 2008
[Excerpts] RALEIGH -- Authorities said that a North Carolina man was critically wounded but still alive yesterday afternoon after being shot the night before at the home of a trooper in the N.C. Highway Patrol. A patrol spokesman said yesterday that Trooper G.S. Grissom was off duty when Rockingham County sheriff's deputies responded to reported gunshots at his home Monday night... Hospital officials said that Curry was in critical condition yesterday. Patrol spokesman Capt. Everett Clendenin said that Grissom, 46, is on administrative leave, which is standard practice after a trooper fires a weapon... [Full article here]

911 Caller: "I Shot This Guy On My Back Deck"
WFMY News 2, NC - Dec 24, 2008
Mackenzie McKenzie
12/23/2008
[Excerpts] Rockingham County, NC -- Investigators released 911 calls from Monday nights officer-involved shooting in Rockingham County. The shooting happened at 46-year-old state trooper Gary Grissom's home. Rockingham County investigators say Grissom shot 27-year-old Patrick Martin Curry. Through 911 calls, WFMY News 2 learned a third person was in the home during the shooting... Grissom called 911 prior to the shooting, according to the tapes. He asked for deputies to respond to his house. When a dispatcher asked why he said "I got a little crazy guy over here with a gun. But don't put that on the radio, but tell them I need them to slide on over here." Before deputies arrived at the home on Oak Level Court, Grissom called 911 again. "I just called," he said, "I mean I just shot this guy on my back deck. He just come here and beat me in the head." Grissom asked for EMS and deputies. Then dispatchers demanded answers. Minutes later, a witness called... Grissom is not facing any charges... [Full article here]

Update: Off-duty trooper shoots man at Rockingham County home
News & Records
By Jonnelle Davis jonnelle.davis@news-record.com
Wednesday, December 24, 7:51 am)
[Excerpts] REIDSVILLE — A Reidsville man was hospitalized in critical condition Tuesday after being shot by an off-duty state trooper in a disturbance at the trooper’s home. The Rockingham County Sheriff’s Office said G.S. Grissom, 46, shot Patrick Martin Curry after a disturbance Monday night... The wounded man’s father said Tuesday that the shooting was the result of a personal dispute, which had been brewing for at least a month. Steve Curry said Grissom was involved with his daughter-in-law, Cameron Curry. “He had been dating my son’s wife,” Steve Curry said Tuesday night. “They’ve been trying to work things out and get back together.” Patrick and Cameron Curry have been married for five years and have been separated for the past six months, his father said... Officials refused to provide any other specifics about the shooting and directed questions to the State Bureau of Investigation, which is handling the investigation... STEVE CURRY SAID HE KNOWS NOTHING ABOUT WHAT PRECIPITATED THE SHOOTING, BUT HE SAID HIS SON WAS AT HOME ABOUT 8:30 P.M. MONDAY, RECEIVED A PHONE CALL AND LEFT. He said Cameron Curry called him from Grissom’s home with the news that his son had been shot. Steve Curry said he could hear his son moaning in the background. “I’m praying and hoping that he makes it,” he said. [Full article here]
on 12/27/2008