[IN] Prosecutor, soon-to-be-judge, Jennifer Evans will recover from gunshot wound to head 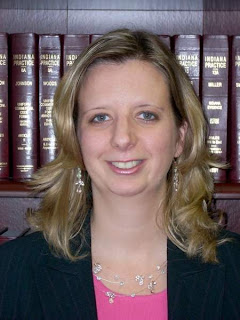 ...Evans' husband didn't want to go into too much detail or go on-camera, because the investigation is ongoing, but he said that, "She didn't know it was loaded…

Husband: LaPorte County deputy prosecutor, soon to be judge, accidentally shot in head
WNDU-TV, IN
Ryan Famuliner
Dec 25, 2008 / Dec 24, 2008
[Excerpts] LaPorte County is abuzz with the news that the deputy prosecutor was shot earlier this week. There had been very little information released about the Monday night shooting, but today WNDU spoke with Jennifer Evans' husband Stephan about the incident, to try and clear things up. He says it was an accidental shooting. The details of the story have been more or less held from the media so far. The county prosecutor's office has really only confirmed there was a shooting at Jennifer Evans' home Monday night, and that her injuries were not life threatening. Evans' husband didn't want to go into too much detail or go on-camera, because the investigation is ongoing, but he said that, "She didn't know it was loaded… when she was handling it." He said he was home at the time, but he wouldn't say who actually fired the gun... LaPorte City Police are investigating the case but wouldn't make any comment today, or even provide WNDU with the police report. They said the prosecutor's office will be releasing all the information and WNDU couldn't get in contact with County Prosecutor Rob Beckman despite numerous calls to staff, messages, and visits to his office Wednesday. NOTE: An associated press report citing our conversation with Jennifer Evans' husband Stephan indicated that she had shot herself. We have not reported that; Stephan would not confirm who shot the gun... [Full article here]

LaPorte deputy prosecutor shot
Evans expected to recover; she was elected judge in November.
South Bend Tribune
BY STAN MADDUX
Dec 25, 2008
LAPORTE - LaPorte County Deputy Prosecutor Jennifer Evans was shot just before midnight Monday, according to police. Evans, who in November was elected judge of LaPorte Superior Court 3, remained in the hospital Tuesday but was expected to survive, Prosecutor Rob Beckman said. "My understanding is she will fully recover and it's not life-threatening," he said. Monday about 11:45 p.m., emergency workers responded to a neighborhood on LaPorte's southwest side where Evans lives. Police directed all questions on the case to Beckman, who would not comment on specifics... [Full article here]
[public official involved domestic violence oidv intimate partner violence ipv abuse law enforcement public safety lethal INDIANA state politics]
on 12/27/2008