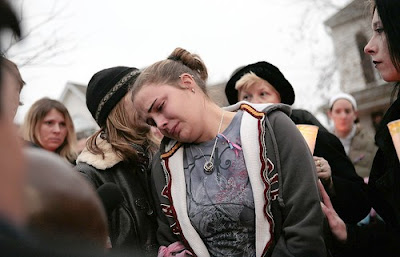 
STACY'S SISTER RIPS DREW ON THE RADIO
Southtown Star
By Joe Hosey
May 1, 2009

Drew Peterson's most recent radio appearance was too much for the sister of his missing wife to bear.

Cassandra Cales called in to Mancow Muller's show on WLS-AM (890) on Wednesday morning and lit into Peterson, calling him a killer in a profanity-punctuated tirade.

"You killed her after she got off the phone," Cales barked at Peterson. "You will pay. I know what happened; I told the state police. Drew knows. It's not for the public's eyes. The truth will be told in court."

Peterson, 55, a former Bolingbrook police sergeant, has not been charged in connection with the disappearance of Stacy, his fourth wife, in October 2007. Stacy, then 23, reportedly spoke with a mutual friend of hers and Cales on her cell phone just before she vanished.

Peterson has contended that his wife ran off with another man. There has been no trace of her since she went missing. Illinois State Police have described her as a "potential homicide" victim and have identified Peterson as their sole suspect.

Peterson has been a regular guest on Muller's show, "Mancow & Cassidy," over the past few months. But Wednesday's appearance veered from the usual light-hearted banter between the host and Peterson.

The exchange between Peterson and Cales was taped Wednesday and aired Thursday morning. In addition to accusing Peterson of murdering her sister, Cales accused him of keeping Stacy's young son and daughter away from her.

Peterson denied that, saying on the air that he does not want the children around Cales because of her poor driving record. He said Cales was involved in a high-speed chase during which police "had to Taser her down to bring her to justice."

Cales laughed that off and returned to calling Peterson a killer, and possibly worse, before hanging up the phone.

"My friend talked to my sister at 10:15 a.m. (the day she vanished)," Cales said. "She was lying in bed, and Drew wasn't in bed. Where were you Drew? You killed her after she got off the phone, you piece of (expletive)."