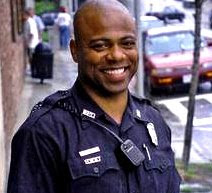 ...Mrs. Mosley said she left and did call police. She did not call because of the argument, but would not say exactly why she called police. “I called police for a different reason,” she said...

I want to say right off the top that there is nothing in the news that I read that reported injuries or any indication that Officer William Mosley has lost control of his temper. If he has, it's not in the news. Also, because this is a blog and not a newspaper, I can tell you that there is a woman in the newspaper earlier this year and last year, by the same name as Officer Mosley's wife that has some charges of her own. I don't know if it's the same person so I won't post them here now. If it is her I also don't know if the charges are legitimate or a set up. I hope though that they both get help on how to get along while they have to parent together - whether they make up or go their separate ways.

I know how hard divorce can be.

WIFE OF CITY OFFICER TO SEEK DISMISSAL OF DOMESTIC CHARGES Worcester Telegram & Gazette
By Scott J. Croteau scroteau@telegram.com
May 26, 2009
[EXCERPTS] WORCESTER — A city police officer will appear in court tomorrow after he was arrested and arraigned last week for allegedly assaulting his wife. Police Officer William D. Mosley, 32, of Ashmore Road, is facing charges of aggravated domestic assault and battery and threatening to commit a crime in Central District Court. The charges stem from a May 19 incident outside his home involving his wife, Stacey Mosley. In an interview today, Mrs. Mosley said Officer Mosley never assaulted her and the whole incident has been “blown out of proportion” by police. She plans to ask for the criminal charges to be dismissed in court... Mrs. Mosley, who is five to six months pregnant, told police that Officer Mosley yelled at her and stated he didn’t want her at the home, the records state... “He did not drag me. He did not assault me... It was a verbal argument.” Mrs. Mosley said she left and did call police. She did not call because of the argument, but would not say exactly why she called police. “I called police for a different reason,” she said... Police Chief Gary J. Gemme said Officer Mosley is on restricted duty and is currently assigned to the Service Division. Citing department policy, Chief Gemme said the officer’s firearms license has been temporarily suspended, as is the case in any type of domestic incident [Full article here]

OFFICER MOSLEY COMES UP IN ANOTHER CASE WHERE HE SHOWS UP, OFF DUTY, FOR AN ATTORNEY-FRIEND'S DOMESTIC SITUATION:

IS THE PROOF, AND THE TRUTH, IN THE COFFEE?Worcester Telegram & Gazette
Dianne Williamson dwilliamson@telegram.com
December 18, 2008
[EXCERPTS] Kevin Larson insists that he never wanted his estranged wife arrested when he called police after she threw coffee on him during an argument in front of their home. Kristina Larson, meanwhile, insists that she “tripped in a hole” on the sidewalk and the cold coffee flew from the thermos and all over her husband’s white dress shirt... Suffice it to say that the Larsons are in the midst of a bitter divorce. And this sort of nonsense doesn’t typically make the newspaper, except that Ms. Larson alleges that her husband, a local criminal lawyer, used his friendship with a Worcester cop to have her arrested... Mr. Larson acknowledged this week that the coffee was cold. He also admitted that he called his friend, Worcester Police Officer William Mosley, on his cell phone, but claims he only wanted the number for police dispatch. Records show that Mr. Larson did call the police non-emergency number at 10:40 a.m. to say that his wife had thrown coffee on him. He wasn’t hurt and the coffee wasn’t “that hot,” he told police, but he wanted to make a report. Meanwhile, in a burst of self-confession and perhaps anticipating that her husband had beaten her to the punch, Ms. Larson called police, too, on her way back home and dutifully reported that she had just spilled coffee on him. Shortly after, a uniformed Officer Mosley and a fellow officer showed up at the house in a cruiser. THEY WERE OFF DUTY but working an overtime detail, according to Police Chief Gary Gemme. “I think he was checking to see if I was all right,” Mr. Larson ventured. Uh-huh. Also on the scene was an officer who was supposed to be there, and Ms. Larson was arrested and charged with domestic assault and battery with a dangerous weapon (hot coffee). Except that both parties agree that the coffee was cold and speculate that police simply assumed it was hot... “I was arrested only because my husband has connections and he told them to arrest me,” she said. But Sgt. Kerry Hazelhurst, a police spokesman, noted that domestic violence laws require police to make an arrest when even the slightest instance of abuse is alleged, and he said that Officer Spinelli responded appropriately... [Full article here]

BOXING `SHOWDOWN' TO BENEFIT YOUTHSWorcester Telegram & Gazette (MA)
Kathleen A. Shaw
Thursday, May 6, 2004
[EXCERPTS] WORCESTER -- The well-known and not-so-well-known of Worcester will converge on the Palladium on Main Street tonight for the annual ``Downtown Showdown II'' boxing match. The tickets, at $20 each, sold out long ago, said LAWYER Anthony M. Salerno, one of the organizers... Worcester police Officer Will Mosley will square off against state Trooper Robert Krom in what is called ``The Battle of the Blue." Mr. Mosley is 6 feet 4 inches tall and Mr. Krom rises to 6 feet 7 inches tall, Mr. Salerno said, noting it might be called "The Battle of the Giants"...

SIX PACK FOR GARCIA, GONZALEZ
Worcester Telegram & Gazette (MA) -
Author: Bud Barth
COLUMN: BOXING NOTES
Sunday, February 11, 2007
[EXCERPT] ...William Mosley , 30, super heavyweight - A Worcester police officer , Mosley won the Rocky Marciano Tournament about four years ago, according to Garcia, and is one of the three local favorites to capture a title next week, Lowbridge and Edwin Rodriguez being the others...

WORCESTER OFFICERS SET TO BOX IN LONDON Police to box 'across the pond'
Worcester Telegram & Gazette
By Milton J. Valencia
Tuesday, June 27, 2006
[EXCERPTS] For Police Officer Andrew "A.C." Cravedi, boxing is about the excitement. For Officer William D. Mosley, it's the passion. '"I train seriously now, it's like a lifestyle to me," he said. The two partners on the police beat are part of an effort to establish a Worcester Police Department boxing team, and will pioneer that cause when they travel to London on Friday to fight police officers on that city's metropolitan force... "They're going to be representing Worcester police," said Officer Nathan Reando, of the gang unit, who is spearheading efforts to form the Worcester team.... Officers Cravedi and Mosley leave for London tomorrow, and fight Friday as heavyweights... In their day jobs, they're partners on the 3-11 p.m. shift, patrolling the Pleasant and Chandler streets area. They have different styles on the job, with Officer Cravedi being the diplomat and Officer Mosley being the enforcer. Officer Cravedi likes to call it "verbal judo." "I'm not tolerant of too many excuses," Officer Mosley said. "If a situation calls for more diplomacy, he's the man... There's going to be knockouts," Officer Mosley predicted. [Full article here]
[police officer involved domestic violence law enforcement massachusetts recant recanting]
on 5/26/2009