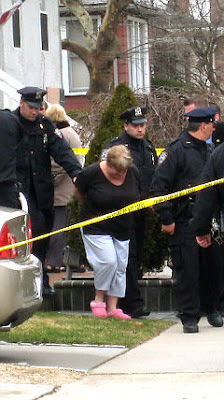 Ex-cop terrorized her; afraid she'd die - slay wife's lawyer
New York Daily News
BY Patrice O'Shaughnessy
February 25th 2008
Barbara Sheehan suffered horrible abuse at the hands of her cop husband for 18 years, her lawyer says. And as she sits in jail after killing him, she is relieved yet remorseful and calls the outcome "tragic" and "terrible," attorney Michael Dowd told the Daily News. Sheehan is charged with murder for shooting retired NYPD crime scene unit Sgt. Raymond Sheehan 11 times with his own guns in their Howard Beach, Queens, home a week ago. "No question, the abuse was substantial, violent," said Dowd, a lawyer well-known for defending suspects who kill their abusers. "He terrorized her"... Raymond Sheehan had responded to murders, domestic violence assaults and all manner of mayhem in 20 years with the NYPD. His former cop colleagues said the "nice guy" and family man whose wife called him several times a day at work gave no signal there was trouble at home. Neighbors say Raymond Sheehan was a kids' sports coach and active in his church. Cops have no record of prior domestic violence... One former colleague said he was torn between attending Sheehan's funeral Saturday, and "paying respects to a possible wife beater"...
on 2/25/2008