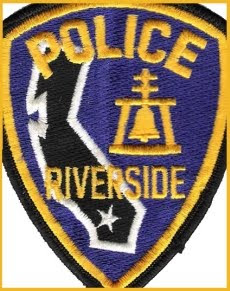 Accused: ...[S.W.A.T. trained Riverside Police Detective Scott Alan] Impola was outside his wife's apartment when he requested the records check.... looked through the living room window... knocked on the door... pushed his way inside... then used his hand to choke and punch the victim in the head with his fist...

Also see:
"Another Day, Another RPD officer arrested?" on  Five before Midnight blog, "dedicated to the continuous oversight of the Riverside(CA)Police Department..."

And to Det. Impola - don't worry about taking your photo down from where it is. I'm not going to post it.

COP ACCUSED OF BEATING WIFE'S BOYFRIEND
The Press-Enterprise
Richard Brooks
December 28, 2009
[Excerpts] A Riverside police detective is scheduled to be arraigned Tuesday on misdemeanor charges that accuse him of forcing his way into the apartment of his estranged wife and beating her male companion, according to court documents. Det. Scott Alan Impola faces one count each of running an unauthorized license plate check on an SUV driven by Michael Ernest Garcia, trespassing by forcing his way into the Riverside home of Tina Anderson Impola, and assaulting Garcia... Impola remains employed by the police department pending the outcome of the court case and an administrative investigation... At the time of the confrontation, the 42-year-old detective and his wife had been separated about a year and lived apart, according to the affidavit. Impola was outside his wife's apartment about 9 p.m. when he requested the records check, which constituted a willful and unauthorized disclosure of Department of Motor Vehicles information, Soler wrote. Impola looked through the living room window about 9:45 p.m. and saw her and Garcia on a couch, Soler wrote. When Tina Impola saw her husband, she confronted him on the front porch, then went back inside and shut the door, the affidavit says. Seconds later, the detective knocked on the door and said he wanted to talk, but allegedly pushed his way inside when his wife opened the door. "The suspect then used his hand to choke (Garcia) and punched the victim in the head with his fist," Soler wrote. "Suspect Impola eventually let go of the victim, walked outside and waited for the police." Impola invoked his Miranda rights and refused to make a statement, according to the court document. Paramedics treated Garcia for bruises on his forehead, scratches on his neck and cheek, and swollen eyes. Impola is described in the affidavit as 6-feet-2 and 210 pounds. Garcia's size isn't mentioned... [Full article here]
[police officer involved domestic violence oidv intimate partner abuse law enforcement public safety california state computer database access]
on 12/29/2009