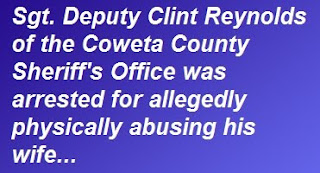 DEPUTY ARRESTED FOR ASSAULT
The Newnan Times-Herald
By Elizabeth Richardson
December 03, 2009 in Local
[Excerpts]  Sgt. Deputy Clint Reynolds of the Coweta County Sheriff's Office was arrested in Fairburn Wednesday afternoon for allegedly physically abusing his wife... Reynolds was transported to the Coweta County Jail where he now faces criminal charges of battery and aggravated assault... The GBI was asked by the sheriff's office last week to initiate an investigation into allegations of domestic abuse involving Reynolds... Coweta County Sheriff Mike Yeager first confirmed last week that the sheriff's office was aware and looking into the "personnel" matter. Calls to the sheriff's office for information were not returned Wednesday... [Full article here]