[IN] COP ON COP DV: Detective Meredith Hanley - held without bond - gets to walk right out of jail 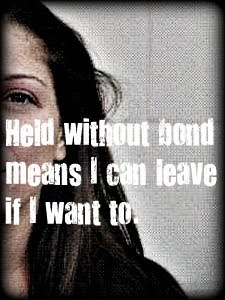 A detective with the South Bend Police Department was arrested early Saturday after allegedly beating her husband, also a South Bend cop, in their home... [Cpl. Meredith] Hanley's husband, 41-year-old [SH], is a lieutenant with South Bend police. They both work in the detective bureau... Hanley was taken to the St. Joseph County Jail by county police and held without bond. But she was released from jail at 4 p.m... Meredith Hanley actually worked for the county prosecutor's office in the past in their special victim's unit; where she worked with those with family violence issues...

SOUTH BEND DETECTIVE ARRESTED FOR DOMESTIC VIOLENCE
WSBT
By Kelli Stopczynski
Dec 19, 2009
[Excerpts] A 10-year veteran of the city's police department is on administrative leave, following a domestic violence arrest early Saturday morning. St. Joseph County Police Sgt. Bill Redman confirmed Cpl. Meredith Hanley, a detective in the department, was arrested at her home after an alleged incident involving her husband, who is also a South Bend police officer. Her husband was not arrested. Redman said police were called to a neighbor of the Hanleys at 1:35 a.m. The victim went there after the alleged assault. He told the officers Meredith had struck him over the head during an argument, and then scratched his neck and ear as he was standing back up... Officers then went to the Hanley residence. When Meredith didn’t come to the door, they got the garage door code from her husband and entered the home... she said she didn’t want to speak to the officers and requested an attorney. She was arrested for domestic violence/battery, a misdemeanor... Meredith will be on paid administrative leave until the Board of Public Safety votes to make it unpaid. [Full article here]

SOUTH BEND OFFICER ARRESTED FOR DOMESTIC BATTERY
Corporal accused of striking her husband.
South Bend Tribune
By Mary Kate Malone
Dec 19, 2009
[Excerpts] A detective with the South Bend Police Department was arrested early Saturday after allegedly beating her husband, also a South Bend cop, in their home... [Cpl. Meredith] Hanley's husband, 41-year-old [SH], is a lieutenant with South Bend police. They both work in the detective bureau. The department has placed Meredith Hanley on administrative leave, taking away her police powers, badge and gun... [SH] told police that his wife turned violent during a verbal argument... Meredith Hanley allegedly struck her husband in the head several times and scratched his neck and ear, police said. He sustained visible injuries, police said. Both had been drinking that evening... [SH] called police after the assault and fled to a neighbor's house, occupied by his boss, Rick Bishop, division chief of the detective bureau... She was booked into the St. Joseph County Jail, where she is being held without bond... Meredith Hanley is scheduled to appear in court at 1:30 p.m. Monday... [SH] has been with the department for 16 years; Meredith Hanley for 10 years, police said. The four-member Board of Public Safety will decide whether to put her on unpaid leave... [Full article here]

UPDATE: SB OFFICER OUT OF JAIL, CASE TURNED OVER TO SPECIAL PROSECUTOR
A South Bend police officer is out of jail after being arrested on domestic violence charges. Meredith Hanley allegedly attacked her husband, who is also a South Bend cop.
WNDU
Reporter: Ryan Famuliner
Posted: 6:12 PM Dec 21, 2009
Updated: 4:12 PM Dec 22, 2009
[Excerpts] A South Bend police officer is out of jail after being arrested on domestic violence charges... Despite a court appearance Tuesday, there are still no official charges against Hanley. The judge set a status hearing for January 12th. The St. Joseph County Prosecutor's office is now asking for a special prosecutor from a neighboring county to handle this case... The court appointed the LaPorte county Prosecutor to handle the case, and it will be assigned to Deputy Prosecutor Alan Sirnek... As it turns out, Meredith Hanley actually worked for the county prosecutor's office in the past in their special victim's unit; where she worked with those with family violence issues... County officials told WNDU over the weekend, and into Monday morning, that Meredith was being held until a court appearance Monday afternoon without bond. A spokesperson from the prosecutor’s office explained Monday morning that this is regular practice in a domestic violence case. But when WNDU tried to attend Hanley’s scheduled hearing Monday, we found out she had been released from jail over the weekend. County Prosecutor Michael Dvorak then told WNDU that South Bend police called his office Saturday night to say Hanley had surgery scheduled for 11:00 a.m. Monday. Dvorak says he “took their word for it.” Judge Scopelitis ordered her release, and she was out on Sunday. Dvorak says Hanley is scheduled to appear in court Tuesday at 8:00 a.m. However, Dvorak says he’s not sure what type of surgery she had and if she will have recovered at that point, and may just be represented by an attorney. South Bend Police say that Meredith Hanley is currently on paid administrative leave. That is the only punishment allowed by the police chief without the involvement of the board of public safety, and its next scheduled meeting is January 6th. Chief Darryl Boykins has not recommended she be taken off paid leave as of yet, and a police spokesperson says they will likely wait to see how the situation plays out in court before making any decision. A special meeting of the board is unlikely, as he also said it may be “procedurally impossible” to get the board together for a legal vote during the next couple of weeks due to the holidays. [Full article here]

SPECIAL PROSECUTOR APPOINTED IN DETECTIVE'S CASE
Hanley was released early for medical reasons, officials say
South Bend Tribune
By Mary Kate Malone
Dec 22, 2009
[Excerpts] A South Bend police detective who was arrested last weekend after allegedly beating her husband was released early from jail for medical reasons, officials said... Formal charges against Cpl. Meredith Hanley have not been filed... Hanley was taken to the St. Joseph County Jail by county police and held without bond. But she was released from jail at 4 p.m. Saturday after her boss, South Bend police Division Chief Rick Bishop, called St. Joseph County Prosecutor Michael Dvorak. He told Dvorak that Hanley had surgery scheduled for Monday morning and needed time to prepare for it, Dvorak said. Dvorak asked St. Joseph County Superior Court Judge Michael Scopelitis to order Hanley be released, which he did. She did not post bond, Dvorak said. Given her medical situation and assurances from Bishop that Hanley and her husband would be kept apart, Dvorak and Scopelitis felt an early release was appropriate, Dvorak said... Dvorak said he did not know the nature of Hanley's surgery... The special prosecutor will decided what charges, if any, should be filed against Hanley... Hanley once worked for the Special Victims Unit, which is overseen by an investigator from the prosecutor's office... Indiana State Police have taken over the investigation of the case... [Full article here]
[police officer involved domestic violence oidv intimate partner abuse law enforcement public safety cop on cop brass indiana state preferential female]
on 12/23/2009