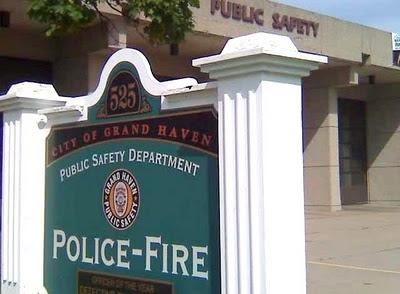 ...Dana DeVries said she did not know why the charge was dismissed, but was happy with the decision...

FORMER GRAND HAVEN OFFICERS FIRED AFTER DOMESTIC DISPUTE FIGHT TO GET JOBS BACK
The Grand Rapids Press
By John Tunison
December 30, 2009, 4:56PM
[Excerpts] Two married but estranged Grand Haven Public Safety officers [Dana and James "Todd" DeVries] say they plan to fight to get their jobs back after a November domestic dispute preceded their dismissals from the department... Details about the job fight emerged after prosecutors this week decided to dismiss a domestic violence charge against Dana DeVries, a 36-year-old award-winning officer prior to her Dec. 16 job loss. The order to dismiss the misdemeanor charge was signed by Holland District Judge Brad Knoll on Wednesday. Dana DeVries said she did not know why the charge was dismissed, but was happy with the decision...
[police officer involved domestic violence OIDV law enforcement intimate partner abuse state michigan cop on cop female]
on 12/31/2009