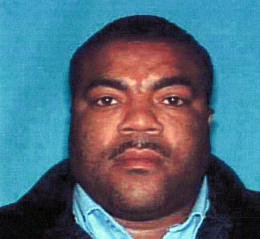 Texas Department of Corrections Officer Albert Turner is wanted in connection with the slaying of his wife and mother-in-law. He may be driving a 1994 maroon Honda Accord with Texas license plate 494-JFY. Anyone with information regarding his whereabouts is urged to contact authorities. Killed: wife Keitha Frank Turner and her mother Betty Jo Frank. “He's armed. He's dangerous. He needs to be taken into custody”...

POLICE: TDCJ OFFICER WANTED FOR ALLEGEDLY KILLING WIFE, MOTHER-IN-LAW
Credit: Rosenberg Police Dept.
by Rosa Flores / 11 News
December 27, 2009
[Excerpts] A corrections officer is wanted for murder and a Rosenberg congregation is mourning the loss of two of their own. One by one, members of The Church of Living Waters in Rosenberg left Sunday service filled with grief. During the service they learned two members of the pastor’s family were murdered overnight. “We know that there was a cutting instrument that was involved. Both victims were stabbed,” said Lt. Colin Davidson from Rosenberg Police Department. Police say it all happened inside Pastor Gene and Betty Jo Frank’s home... The couple and their daughter were violently attacked while four grandchildren watched. Now the young children’s father, 44-year-old Albert Turner, who is also a Texas Department of Corrections jail guard is wanted for the murder of his wife, Keitha Frank Turner and the murder of his mother-in-law Betty Jo Frank. Just the thought that the suspect is still on the loose has some people in the Chestnut neighborhood terrified. At least three homeowners plan to leave their homes for a few days. Other neighbors are in disbelief... Turner could be on his way to Florida, where he is from. Authorities around the state are on the lookout for Turner’s car, a maroon Honda Accord with the license plate 494-JFY, and police say you be should too. “The violent crime scene that the police officers encountered, I haven’t seen anything like this since I’ve been here. I would definitely say armed and dangerous,” said Lt. Davidson. And while police are not discussing a motive neighbors say this time the violence went too far. “Supposedly he was abusive to her,” said Sparks. [Full article here]

PRISON GUARD ACCUSED IN ROSENBERG SLAYINGS
Manhunt under way after his wife and mother-in-law are stabbed to death
By Paige Hewitt
Houston Chronicle
Dec. 28, 2009, 6:48AM
[Excerpts] A multistate manhunt continues today for a Texas prison guard accused in the killings of his wife and mother-in-law, who were stabbed in front of children in Rosenberg earlier in the day, officials said.
Authorities are searching for 44-year-old Albert James Turner, who is charged in the deaths of 39-year-old Keitha Frank Turner and 66-year-old Betty Jo Frank, said Lt. Colin Davidson of the Rosenberg Police Department. The two women were the daughter and wife of prominent Rosenberg preacher Gene Frank of the Church of Living Waters, Davidson... Eyewitnesses, including a child who called 911, identified Turner as the killer, Davidson said, and the sound of children screaming can be heard in the background of the call. “The children did witness some of it, yes,” Davidson said... Turner fled the scene before police arrived... [Full article here]

POLICE SEEK MAN IN ROSENBERG DOUBLE SLAYING
Mother, Daughter Fatally Stabbed
click2houston.com
POSTED: Sunday, December 27, 2009
UPDATED: 5:37 pm CST December 27, 2009
[Excerpts] ...Investigators said 44-year-old Albert Turner is believed to be on the run, and that law enforcement agencies along Interstate 10 all the way to Florida are on alert. “He's armed. He's dangerous. He needs to be taken into custody,” said Lt. Colin Davidson, with the Rosenberg Police Department, of Turner. Police said Turner was staying with his in-laws, Gene and Betty Joe Frank, on Saturday night with his wife and children when something went awry... “When I heard parts of the tape, all I heard was screaming and digits being pushed on the phone,” said Davidson. Responding officers found 66-year-old Betty Jo Frank had been stabbed to death and her 39-year-old daughter, Keitha Turner, had also been stabbed. Keitha Turner later died at a nearby hospital. Police said the Turners' two children -- the oldest of which is 12 -- where in the home during the attack, and police said they, along with their grandfather, were still in the home when police arrived, but Albert Turner was gone... Albert Turner is wanted in connection with the slaying of his wife and mother-in-law, and said he may be driving a 1994 maroon Honda Accord with Texas license plate 494-JFY. Anyone with information regarding his whereabouts is urged to contact authorities... “Betty Jo didn't talk about her family -- the negatives,” [family friend Carol] Hamrick said. “She only talked about positives.” The Franks are well-known for many positive contributions, including the founding of the Church of Living Waters in Rosenberg and the Living Water Christian School, where Keitha Turner taught. [Full article here]
[police officer involved domestic violence oidv intimate partner abuse law enforcement public safety fatality fatalities murder texas state children]
on 12/28/2009