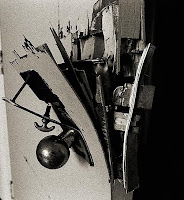 ...She said she felt threatened by her husband following an incident two days earlier in which the door to her bedroom was demolished and removed from its hinges...

LAKEWOOD COUNCILMAN ARRESTED
Court: Finnigan accused of violating wife’s protection order
News Tribune, Tacoma
Brent Champaco; The News Tribune
Published: 12/05/09  12:05 am
[Excerpts] A Lakewood city councilman was arrested and booked into jail last month for allegedly violating a protection order that his wife filed against him. According to a police report, Dayton “Pad” Finnigan, 66, allegedly violated the order Nov. 27 at the Lakewood post office... He has not been charged with a crime. Lakewood has asked Pierce County District Court to handle the case because Pad Finnigan, first elected to the Lakewood City Council in 2001 and re-elected four years later, is a city official...
Deputy prosecutor Patrick Hammond, who supervises the court’s domestic violence unit, said his office hasn’t decided whether to file charges. “I will look to see if it’s legally worth charging,” he said.
Christine Finnigan filed the 14-day restraining order against her husband Nov. 23 in Pierce County Superior Court. She said she felt threatened by her husband following an incident two days earlier in which the door to her bedroom was demolished and removed from its hinges... [Full article here]
[public official domestic violence washington state]
on 12/05/2009