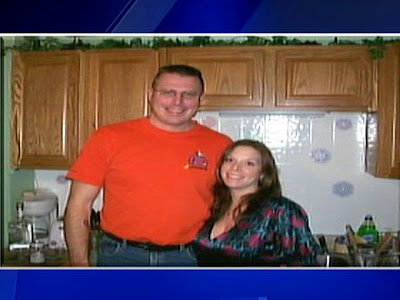 ...Court records show that a Greene County Prison corrections officer filed a protection-from-abuse order against her husband just two months before she was killed... Several people said Melissa Baker planned to get a divorce... Scott Baker's 12-year-old son, [N.B.], also was residing in her home. Police said [N.B.] was in the home when Scott Baker killed his wife...

HUSBAND CHARGED WITH KILLING COUNTY PRISON OFFICER WHO ONCE GOT PFA
Affidavit: Children Present When Melissa Baker Was Attacked
thepittsburghchannel.com
POSTED: 10:31 pm EST November 20, 2009
UPDATED: 6:57 pm EST November 23, 2009
[Excerpts] Court records show that a Greene County Prison corrections officer filed a protection-from-abuse order against her husband just two months before she was killed, allegedly at his hands while two children were home. The body of Melissa Baker, 30, was discovered inside a mobile home on Crucible Road in Cumberland Township sometime after 6 p.m... Police said she died of apparent trauma to the throat. After interviewing witnesses, police arrested her husband, Scott, 37, and charged him with criminal homicide. "I was devastated when I got the phone call yesterday that they had found Officer Baker deceased. She's a very good officer, had been with us about a year," Warden Harry Gillispie said... A co-worker who lives nearby knocked on Melissa Baker's door, but there was no answer. Police went by and found her inside. Neighbors told WTAE Channel 4 Action News that Melissa Baker had just moved in a month ago with her 18-month-old son. Court papers said she moved there to get away from her husband and start divorce proceedings... Scott Baker took his 12-year-old son and the couple's boy to Melissa Baker's home Friday afternoon. The affidavit states Scott Baker ordered his son to take the baby to his room... "When (the boy) came into the living room, he saw Melissa on the floor and Scott was on top of her. Scott had his arm over Melissa's mouth, and (the boy) thought Scott was smothering her... as he was leaving, he saw Melissa motionless on the floor," the affidavit states... The PFA was filed Sept. 14 and would have stayed in effect until 2012, but Cipriani reported that Melissa Baker asked to withdraw it and the request was granted... Her husband faces a preliminary hearing scheduled for Dec. 12 and remains held without bail. [Full article here]

WIFE RETRACTED PFA ON HUSBAND
Washington Observer-Reporter
By Bob Niedbala, Staff writer, niedbala@observer-reporter.com
11/24/2009 3:30 AM
[Excerpts] Melissa Baker filed for a protection-from-abuse order against her husband, Scott, two months ago after an incident in which he told her he was going to kill himself, pushed her to the floor and threatened her. The petition was filed and a temporary order granted Sept. 14. But two weeks later, the order was withdrawn at Melissa Baker's request. On Friday, Melissa Baker was found dead in her mobile home in Crucible. She had been strangled and her neck cut with a knife. Her husband, Scott J. Baker, 37, of Nemacolin, is being held in Washington County Jail charged with her death... In her PFA petition, Baker said she and her husband argued Sept. 14 about whether to have another child. He had been drinking, she said, and had made her write down that he was not responsible for their 18-month-old son; he wanted to give up his rights to the child. Scott Baker said he was going to kill himself and grabbed a knife, Melissa Baker said. He also told her to get her gun but she refused. Scott Baker slammed the door on her hand and pushed her to the floor, injuring her foot and hand. He also waved the knife in her face. "He was still saying he was going to kill himself and that it could be a slow painful death or he could blow his brains out," the petition said. He also said he could stab her if she didn't get the gun. Melissa Baker said she eventually escaped and was able to call police. An ambulance came and Scott Baker agreed to go to the hospital and commit himself, the petition said. Scott Baker was served the petition by a sheriff's deputy that day on the fourth floor at Southwest Regional Medical Center. The floor contains the hospital's behavioral health unit. Melissa Baker also said in the petition that Scott Baker had abused her in the past, pushing her into the oven and injuring her head on a knob, pushing her to the floor and threatening to kill her and her child. He also had threatened her with a knife, she said... Several people said Melissa Baker planned to get a divorce. The petition indicates she also was seeking custody of the couple's 18-month-old son... Scott Baker's 12-year-old son, [N.B.], also was residing in her home. Police said [N.B.] was in the home when Scott Baker killed his wife Friday and witnessed part of the assault. A man who knew the couple, Travis Penich of Carmichaels, said the couple seemed to get along well but it was easy to see Scott Baker was "very controlling." Penich said he lived with Scott Baker in Crucible for four to six years about eight years ago. Melissa Baker also lived in the home with Scott for about two years. "Melissa was a really, really nice person. She would go out of her way to do anything for anyone," Penich said. Penich said Scott Baker was "actually OK." He was not violent or the type of person to go out and start trouble, but he was very serious. "You could joke with him, but everything he did in life was pre-meditated. He was very organized down to the last penny." He also was very impatient and appeared on edge or like "he could snap," Penich said. Penich, who is an uncle to Scott Baker's son [N.B.], said he believes Scott Baker wasn't working and was on disability for a knee injury... [Full article here]

COMMENT FROM THAT WEBSITE:
Betrayed
11/24/2009
You cant trust anyone anymore. I trusted that man w the most important thing in my life my son. My son looked up to that man as is ftball coach and a friend. We were on the phone with scott the night the cops were looking for him and he acted like we were talking to him about an mutual freind not his wife.Anyone that can stay that calm as he did both times we spoke to him on friday definatly has mental issues. Ijust wish that i would have knew sooner that he was like that because my son would have never went near his place. My heart goes out to those boys and the family. Ihope someday god forgives scott because i dont see him getting it from all he decieved. May you spend the rest of your life scott with nothing but pain and remorse.

POLICE: NEMACOLIN MAN KILLS CORRECTIONS OFFICER WIFE WHILE CHILDREN NEAR
TRIBUNE-REVIEW
By Liz Zemba lzemba@tribweb.com
412-601-2166.
Monday, November 23, 2009
[Excerpts] A Greene County man killed his wife while his two children played in a nearby room, according to court documents. Scott Joseph Baker, 37, of Nemacolin is charged with criminal homicide in the death of Melissa Ann Baker, 30, of the village of Crucible in Cumberland Township, Greene County. Melissa Baker, a corrections officer in the Greene County Prison, died of throat trauma, police said. In a criminal complaint, police said she suffered a slash wound to the right side of her neck. Her body was discovered by two coworkers who stopped by her mobile home after she failed to report for the 4 p.m.-to-midnight shift Friday in the jail, said Warden Harry Gillispie. "When they knocked on the door, it went open a little on its own, and they saw her on the floor," Gillispie said. "She didn't have a pulse, so they called 911." In the criminal complaint, police said Scott Baker's son [N.B.] told them that he, his 18-month-old half-brother and Scott Baker went to Melissa Baker's house on Friday morning. Melissa Baker was the 18-month-old child's mother and [N.B.]'s stepmother. Court documents did not give [N.B.]'s age. [N.B.] told police he was in the bathroom when he heard his stepmother scream and his father calling for him to come and get his half-brother. When [N.B.] went into the living room, he saw his father on top of Melissa Baker, police said. "Scott had his arm over Melissa's mouth and [N.B.] thought Scott was smothering her," the complaint says. "[N.B.] took the baby into the baby's room and played with him until he heard Scott call and tell him to bring the baby, it was time to leave." [N.B.] told police that as he was leaving the residence, he saw his stepmother motionless on the floor. He said his father drove to a service station and then went home. Sometime later, Scott Baker went back to Melissa Baker's residence, police said. [N.B.] told police he sat in a truck outside the residence while his father went inside "to make the home look like a robbery had happened." Scott Baker then returned to his residence, police said. Gillispie said Sunday that Melissa Baker was in training to fill a supervisor's position. He described her death as a "tremendous loss" to the prison. According to the criminal complaint, Melissa Baker had previously obtained a protection-from-abuse order against Scott Baker. "It's another senseless case of domestic violence," Gillispie said. "It's so senseless. A waste of a human being over nothing." According to her MySpace page, Melissa Baker's survivors include a toddler son, [B.B.], and her stepson, [N.B.]. She obtained a bachelor's degree in criminal justice and was a 1997 graduate of Laurel Highlands High School. Scott Baker was initially placed in the Greene County Prison without bond, but he has since been transferred to the jail in Washington County. A preliminary hearing is scheduled for Dec. 1. [Full article here]
[police officer involved domestic violence law enforcement fatality fatalities murder pennsylvania state jail]
on 12/01/2009