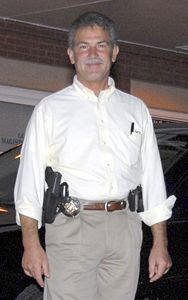 
ORANGE LAWMAN DIES FROM GUNSHOT WOUNDS
Orange County Sheriff’s Office investigator Bob Canosa died Sunday afternoon at the University of Virginia Medical Center.
Culpeper Star Exponent
Rhonda Simmons
Published: December 20, 2009
Updated: December 21, 2009
[Excerpts] Bob Canosa, a veteran investigator with the Orange County Sheriff’s Office, died Sunday afternoon at the University of Virginia Medical Center, succumbing to complications from multiple gunshot wounds he suffered nine days ago, according to the Virginia State Police. He was 55. VSP spokesman Sgt. Les Tyler said Special Agent M.L. Jones has charged Canosa’s estranged wife, Brenda Lee Canosa, 49, with first-degree murder. Brenda Canosa, who is being held at Central Virginia Regional Jail in Orange, also faces felony charges of malicious wounding and using a firearm in the commission of a felony... Orange County Sheriff’s Office is not releasing a transcript of the emergency call, saying it could jeopardize the case. Bob Canosa’s death comes on the heels of what could have been viewed as promising news in his recovery. Last week, a source close to the family said the victim had undergone surgery to repair his pancreas and aorta. He was also reported to be responding to questions and was aware of what happened to him... Bob Canosa coordinated Orange County’s citizens law enforcement academy, a function he also performed while at the Culpeper County Sheriff’s Office in the mid-2000s. He started his law enforcement career in Culpeper in the early 1970s before moving to the town of Orange Police Department. After retiring from a lengthy tenure of police service in Suffolk, N.Y., he was brought to Culpeper to work on a part-time basis in 2004 by former Sheriff H. Lee Hart. He took the job in Orange in August 2007, shortly before Jim Branch was elected Culpeper’s sheriff. [Full article here]

NO BAIL FOR WIFE IN SLAYING OF DEPUTY
Wife of slain Orange sheriff's investigator still being held with no bail on murder charges in his death
The Free Lance-Star
Robin Knepper
Date published: 12/22/2009
[Excerpts] The estranged wife of a slain Orange County sheriff's investigator will stay in jail for the foreseeable future while waiting to face charges in his death. Bob Canosa, 55, died Sunday morning as a result of multiple gunshot wounds he received Dec. 11.... Brenda Lee Canosa, who lives in Rochelle in Madison County, has now been charged with first-degree murder and the use of a firearm in commission of a felony. Previous charges of attempted murder and malicious wounding have been dropped... Canosa underwent multiple surgeries for his wounds at the University of Virginia Hospital in Charlottesville. According to Chief Deputy Tim Murphy, Canosa was moved from the intensive-care unit last Wednesday and "was getting remarkably stronger every day." Murphy said he was told that Canosa "developed an infection, but someone also said he got a blood clot in his lung." Canosa was returned to the intensive-care unit, where he died late Sunday morning. Brenda Lee Canosa, 49, was scheduled to appear in Juvenile and Domestic Relations Court yesterday afternoon, but snow from the weekend storm kept her attorney, Dana Slater, from making it to court. Nevertheless, J&DR Judge Frank Somerville heard from Slater by telephone and as a result Canosa's status was not changed. Bail has not been sought and Canosa continues to be held in Central Virginia Regional Jail in Orange. A preliminary hearing will be held in J&DR court Feb. 8 to determine probable cause for an indictment in Orange County Circuit Court... [Full article here]

COMRADES REMEMBER FALLEN DEPUTY AS SNOW POSTPONES ORANGE HEARING
Charlottesville Daily
Published: December 22, 2009
[Excerpts] ...Judge Frank Sommerville denied her request for bail last week. The Orange County clerk added that Brenda Canosa’s lawyer, Charlottesville’s Dana Slater, could request another bond hearing before the next court appearance. Brenda Canosa is being held at the Central Virginia Regional Jail in Orange. Meanwhile, the local tight-knit law-enforcement community is mourning the death of one of its own. Canosa, 55, was an investigator with the Culpeper County Sheriff’s Office before transferring to the Orange County Sheriff’s Office in 2007. He died Sunday afternoon at the University of Virginia Medical Center from complications from the multiple gunshot wounds he suffered Dec. 11. Bernie Feaganes III, a Prince William County deputy who worked closely with Canosa on developing the Citizens Law Enforcement Academy in Culpeper, said he was shocked by the reported shooting and his friend’s death. “It was like a punch in the stomach,” said Feaganes, who also left Culpeper County’s Sheriff’s Office in 2007. “I guess I let my guard down when I heard reports of him sitting up and talking last week.” Canosa reportedly had undergone surgery to repair his pancreas and aorta. It was also reported that he was conscious and responding to questions. Feaganes, who still lives in Culpeper, said he and Canosa remained friends even after both men left their law enforcement jobs in Culpeper. “Bob and I were really close, even up to the end,” Feaganes added. “Bob was one of the finest men I’ve ever known. He was one of those people who treated everybody the same.” Feaganes said a 10-minute trip to Walmart with Canosa to gather supplies for the academy would last an hour. “He spoke to everyone... That was the type of person he was”... Culpeper County Sheriff Jim Branch, who also worked with Canosa under former Sheriff H. Lee Hart, shared his condolences Monday. “We have been dealing with the shock of Bob’s being shot and intently following his recovery progress. His untimely death saddens us in the law enforcement community... We will miss his outgoing, pleasant personality as well as his expertise as an officer. Our thoughts and prayers go out to his family and to those whose lives he touched. He will be missed and fondly remembered.” Phone calls and e-mails to Orange County Sheriff Mark Amos were not returned as of press time... [Full article here]
[police officer involved domestic violence oidv intimate partner abuse law enforcement public safety fatal fatalities murder female virgina state shot shooting robert canosa]
on 12/22/2009