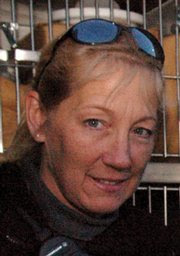 ...Glenwood Springs Police Chief Terry Wilson said his department does not plan to investigate Johnson’s death any further... “She always said, ‘Isn’t it funny how we focus on what angers us most instead of what makes us happy?’”...

Previous post:
[CO] There's very little being said on the death of Craig Police Officer Kathie Johnson - "...Kathie had gone into town to find Ken so she could get him to sign these papers. He hid... and wouldn't sign the pages... Monday, Kathie tried again to get Ken to sign these papers, he wouldn't because of how stressed he [was]. Tuesday Kathie left for Glenwood Springs for a work conference and the next day she was dead..."

REPORT: CRAIG POLICE OFFICER DIED OF NATURAL CAUSES
Craig Daily Press
By Collin Smith
December 10, 2009, 3:38 p.m.
Thursday, December 10, 2009
Updated: December 11, 2009, 12:00 a.m.
[Excerpts] Former Craig Police Officer Kathie Johnson died of natural causes from a seizure disorder, according to an autopsy and toxicology report. The toxicology report, which has been pending for the past few months, came back negative. Johnson, a police department community service officer, was found dead Oct. 14 in a room at the Hotel Colorado in Glenwood Springs... Reports of the incident stated her door was closed and that there were no signs of foul play. Glenwood Springs Police Chief Terry Wilson said his department does not plan to investigate Johnson’s death any further... Eric Plate, Johnson’s youngest son, spoke during the service on behalf of the family and thanked those in attendance for the friendship and love they showed his mother. “Friends and family were the biggest thing to her,” he said. “You meant the world to her. She loved her job and loved the people she worked with.” Plate also spoke about his anger when he first heard of Johnson’s death, and how that dissipated when he remembered his mother’s favorite saying. “She always said, ‘Isn’t it funny how we focus on what angers us most instead of what makes us happy?’” Plate said. “Through all of this, I’ve been an angry person, and until last night, I didn’t take the time to slow down and mourn for my mother. I’m going to live my life by this.” [Full article here]
[police officer involved divorce intimate partner law enforcement public safety fatality fatalities colorado state usur unresolved unsolved cop on cop]
on 12/11/2009