[IN] Resigned from Roseland after caught on tape, Jack Tiller - now a Walkerton Officer - accused of hurting his own daughter 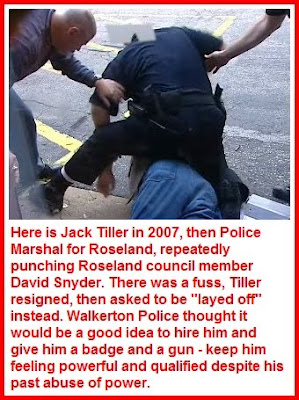 Pray for this family. His daughter will always be his daughter.

WALKERTON OFFICER INVESTIGATED FOR ABUSE
WSBT
By DAVE STEPHENS, Tribune Staff Writer
Dec 14, 2009 at 7:42 PM EST
[Excerpts] A Walkerton police officer has been accused of child abuse, in an incident that was reported last week to St. Joseph County police.Jack Tiller, an officer with the Walkerton Police Department in far southwest St. Joseph County, is accused of abusing his daughter at the family’s home, allegedly punching her in the arm and face, throwing her to the ground and spitting on her... Sgt. Bill Redman, St. Joseph County police spokesman, said the girl complained to an officer at Penn High School, who reported seeing bruises on the girl’s arm and head. According to Redman, the girl told police the fight occurred after she kept her father waiting to pick her up at the school. St. Joseph County Prosecutor Michael Dvorak said the case has been received by the prosecutor’s office Special Victims/Family Violence unit, but no charging decision has been made yet. Tiller’s current status with the Walkerton Police Department is not known... Tiller is the former town marshal of Roseland... In December 2007, Tiller was the subject of a grand jury investigation after he was accused of battering then-Roseland Town Council member David Snyder during an arrest, but no charges were ever filed in the case... [Full article here]

WALKERTON POLICE OFFICER ACCUSED OF CHILD ABUSE
36-year-old Jack Tiller is accused of abusing his 16-year-old daughter at their home in Mishawaka.
WNDU-TV
Dec 18, 2009
[Excerpts] Charges have been filed against the Walkerton police officer accused of abusing his teenage daughter. 36-year-old Walkerton Officer Jack Tiller is being charged with misdemeanor battery on accusations of abusing his 16-year-old daughter. Tiller must appear in court on January 12th. You may remember Tiller from his time as a Roseland police officer, when he was accused of hitting David Snyder during a town meeting... Tiller was apparently upset because his daughter was late when he picked her up from an after-school activity. Tiller has not been arrested... [Full article here]

WALKERTON POLICE OFFICER CHARGED
By WSBT News1
Dec 18, 2009
[Excerpts] A misdemeanor charge has been authorized against Jack Tiller, an officer with the Walkerton Police Department. Catherine Wilson, St. Joseph County prosecutor’s office spokeswoman, said Tiller is being summoned to appear on a Class A misdemeanor battery charge. He is to appear Jan. 12... [Full article here]

TOWN MARSHAL LAID OFF IN ROSELAND
WSBT
By Beth Boehne
Nov 16, 2007
[Excerpt] Roseland officially laid off the town marshal Friday. Jack Tiller resigned his post last month, but wrote a letter asking to be laid off instead... Councilman David Snyder also accused Tiller of brutality during his arrest in August. Snyder voted against Tiller's layoff, citing his letter of resignation. He was also the lone no-vote in promoting Deputy Town Marshal Craig Toner to the position. Snyder says the police department itself should be disbanded... [Full article here]