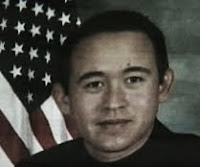 ...[B.L.] managed to lock herself in an upstairs bedroom to call police. According to the affidavit, the officers that responded noticed visible injuries on [B.L.] that were consistent with her story...

OFFICER SUSPECTED OF DOMESTIC VIOLENCE
The Pueblo Chieftain
By Nick Bonham
March 18, 2010 12:00 am
Updated: 11:33 pm, Wed Mar 17, 2010.
[Excerpts] A Pueblo police officer was placed on administrative leave Tuesday after being arrested on suspicion of domestic violence. Officer Donnie Lambert, 31, also was arrested on suspicion of harassment and third-degree assault. Lambert is married to fellow police officer [B.L.]... According to an affidavit by officer Phil Trujillo, the Lamberts were involved in a series of arguments and confrontations over the Monday-Tuesday time frame... The Lamberts were involved in at least two physical altercations at their Belmont home... Donnie Lambert went to police headquarters at noon Tuesday with his lawyer. He declined to be interviewed by detectives and was arrested. He was released from Pueblo County jail Wednesday after posting $2,500 bail. Chief Jim Billings said Donnie Lambert, who works the afternoon shift, is on administrative leave... [Full article here]


PUEBLO POLICE OFFICER ARRESTED FOR ALLEGEDLY ASSAULTING WIFE
KRDO.com
By Sean Hauser
March 18, 2010
[Excerpts] ...Officer Donnie Lambert was arrested Tuesday, accused of assaulting his wife, who is also a cop in Pueblo... [B.L.] says Donnie suddenly became furious and began accusing her of being unfaithful in their relationship. Once they got home, the fight escalated. According to the affidavit, [B.L.] says she grabbed Donnie's arm to try and calm him down, he retaliated by allegedly punching her in the chest two times, pulling her hair and pushing her. The couple separated for the night, but according to the arrest affidavit the fighting continued the following day. [B.L.] says Donnie allegedly came after her again as she tried to call police to make a report. He allegedly grabbed her arm to keep her from using the phone and according to the affidavit; [B.L.] says she thought he was trying to break her arm. She was able to fight back briefly, but he then allegedly threw her to the ground. [B.L.] managed to lock herself in an upstairs bedroom to call police. According to the affidavit, the officers that responded noticed visible injuries on [B.L.] that were consistent with her story... [Full article here]
[police officer involved domestic violence oidv intimate partner violence (IPV) abuse law enforcement public safety cop-on-cop colorado state]
on 3/19/2010