[TX] Son of Allen Police Officers Smith & Smith beat with belt, slapped, and strangled for sarcasm and rolling his eyes 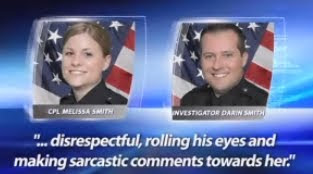 ...Court documents show a doctor who examined the 11-year-old son of an Allen police officer says the child was clearly the victim of physical abuse...


[Notice that strangling a child fades away into an "official repression" charge.]
ALLEN POLICE OFFICERS ARRESTED IN CHILD DISCIPLINE CASE
WFAA-TV
By Steve Stoler
Posted on March 23, 2010 at 9:58 PM
Updated Wednesday, Mar 24 at 4:58 PM
[Excerpts] ...Two married Allen police officers have been placed on leave and face criminal charges after being accused of crossing that line and going too far. Cpl. Melissa Smith is accused of injury to a child resulting from a February incident with her 11-year-old son. “Melissa Smith assaulted her son with a belt, leaving bruising on his buttocks and red marks on his face," said Lt. John Norton of the Collin County Sheriff’s Office, which was asked by Allen police to conduct the investigation. Sheriff's investigators say when Smith's husband, Allen police investigator Robert Darin Smith, came home, he also disciplined the boy, who is his stepson... “Right now, they are on administrative leave with pay," Allen police spokeswoman Sgt. Nicole Shaw said. "Upon learning of the allegations, they were immediately placed on administrative leave and reassigned"... [Full article here]

COURT DOCUMENTS DETAIL ALLEGED CHILD ABUSE BY ALLEN OFFICERS
WFAA-TV
By Steve Stoler
Mar 26 2010
[Excerpts] Court documents show a doctor who examined the 11-year-old son of an Allen police officer says the child was clearly the victim of physical abuse...The court documents obtained by News 8 show Allen police Cpl. Melissa Smith told a Child Protective Services investigator she had slapped her son in the past. She is charged with injury to a child in what sheriff's officials say was much more than slapping... According to the arrest affidavit, it all started when Melissa Smith's 11-year-old son was "disrespectful, rolling his eyes and making sarcastic comments toward her." The court documents say she disciplined him by "striking him on the head with a metal spoon, striking him in the face with her hands and striking him on his buttocks with a belt, leaving severe marks and bruising"... According to the affidavit, the boy's stepfather, Robert Darrin Smith, came home a short time later and "handcuffed the victim, threw him to the ground, strangled him, picked him up and placed him in a car and transported him to the Allen Police Department"... Officer Robert Smith is charged with official oppression... According to the court documents, a CPS investigator asked the boy's mother at what point the discipline would rise to the level of abuse, in her opinion. She responded if she beat her son with a baseball bat and broke his bones, then that would be abuse. Both officers are on paid administrative leave during the investigation... [Full article here]
[police officer involved domestic violence oidv intimate partner violence (IPV) abuse law enforcement public safety texas state child abuse children cop on cop]
on 3/28/2010