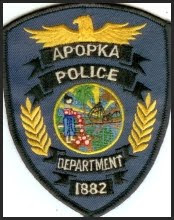 A veteran Apopka police officer [Tanya Culver] is in danger of losing her job after she was accused of firing a gun at her new husband during an argument...

OFFICER CHARGED WITH SHOOTING AT HUSBAND
wftv.com
March 10,2010
[Excerpts] A veteran Apopka police officer has been charged with shooting at her husband during an argument at their Sanford home. Police in Sanford say 36-year-old Tanya Culver, who just married her third husband last month, fired a round at him during a struggle on Sunday. She was arrested and charged with aggravated battery with a deadly weapon... [Full article here]

APOPKA OFFICER ACCUSED OF SHOOTING AT HUSBAND RECENTLY ENDED PROBATION
Apopka police officer Tanya Culver just ended a department probation for violating police policies in 2007
THE ORLANDO SENTINEL, FLA.
BIANCA PRIETO
Wed, Mar 10, 2010
[Excerpts] An Apopka police officer accused of shooting at her husband recently ended a two-year probationary period as punishment for policy violations in 2007, personnel records show. Officer Tanya Culver, a nine-year veteran, is on unpaid leave stemming from a shooting Sunday at her Sanford home. Internal-affairs records from Apopka police show Culver was placed on probation in January 2008 following a July 2007 arrested in Lake Mary for wrecking her personal vehicle after a night of drinking while off-duty. Reports indicate Culver was with [J.F.], her boyfriend at the time, when she crashed her car into a utility pole. Officers indicated she may have been drinking. Lake Mary initially arrested Culver and charged her with DUI and battery on a law-enforcement officer, but the charges were later downgraded to disorderly conduct. That charge was later dropped after she successfully completed a pre-trial intervention program... An Apopka police internal-affairs investigation found that Culver violated two department policies -- conduct unbecoming of an officer and criminal violations -- for acting belligerently with Lake Mary police and fire personnel who responded to the crash. She was also suspended without pay for 160 hours, or about one month, and placed on probation for a two-year period, which ended in January... Culver, who last month married her third husband, [J.F.], was arrested and charged with aggravated battery with a deadly weapon... [Full article here]

APOPKA POLICE OFFICER RELEASED FROM JAIL
Apopka officer Tanya Culver, accused of shooting at husband, is on unpaid leave
THE ORLANDO SENTINEL, FLA.
BIANCA PRIETO
Wed, Mar 10, 5:33 AM
[Excerpts] A veteran Apopka police officer is in danger of losing her job after she was accused of firing a gun at her new husband during an argument Sunday. Officer Tanya Culver, who married her third husband [J.F.] last month, was arrested and charged with aggravated battery with a deadly weapon... "This is something that she could be terminated for," said Officer Steve Popp, spokesman. "But we will have to wait for the outcome of the criminal trial and the internal investigation to be completed to make a decision." Culver, 36, posted $10,000 bail late Monday and was released from the Seminole County Jail with instructions that she not contact her husband or go back to their home. Police records show that Culver and [J.F.] had been drinking prior to their argument and Culver had about eight to nine beers in about two hours. The argument escalated to a physical fight that involved Culver "grabbing and scratching" her husband, police said. When the fighting ended, Culver swallowed a handful of prescription pills and then left the house in her car, [J.F.] told police. About 10 minutes later she returned home and went upstairs to change. While Culver was changing into a bathrobe [J.F.] noticed she had a gun in her hand. She pointed at her head and told [J.F.] "You want me to kill myself I'll do it," report show. [J.F.] told Culver to put the gun away and she pointed it at him and said, "You'll go first and then I'll do me," according to the document. [J.F.] walked toward Culver to pull the gun away from her and it went off, hitting the floor and landing in a box of grits on the first floor, the report shows. When Sanford officers arrived at the home, they found Culver sitting in the garage. She did not comply with officers' orders and began undressing to prove she was not armed, according to the document... [Full article here]
[police officer involved domestic violence oidv intimate partner violence (IPV) abuse law enforcement public safety weapon florida state female perp terroristic threatening murder-suicide]
on 3/10/2010