[NY] News: Mayor Adam Bradley "declined to give a statement to detectives" on wife abuse charge 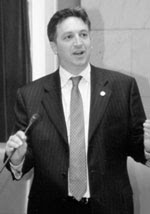 ...[White Plains Mayor Adam Bradley] turned himself in to White Plains police and was charged with assaulting his wife... Police Department officials would not explain why they allowed the Mayor's Office to take the lead in handling the media on the case... Bradley declined to give a statement to detectives...

'ASSAULT' MAYOR TOLD: QUIT, NOW
New York Post
By Tom Topousis
March 2, 2010
[Excerpt] Facing a criminal charge of assaulting his wife over the weekend, White Plains Mayor Adam Bradley yesterday vowed to remain in office, despite a call from a leading women's organization that he step down. "If these allegations are true, Adam Bradley is certainly not fit to be mayor of White Plains," said Marcia Pappas, president of the state chapter of the National Organization for Women. "The citizens of White Plains deserve better." But a spokeswoman for Bradley said, "He has no plans to step down"... [Full article here]


WHITE PLAINS MAYOR ADAM BRADLEY BUSTED IN WIFE ASSAULT
NYDailyNews.com
BY Bill Hutchinson
Monday, March 1st 2010
[Excerpts]The mayor of White Plains was charged with misdemeanor domestic assault Sunday after slamming a door on his wife's finger, cops said. While acknowledging "problems in my marriage," Mayor Adam Bradley denied any wrongdoing Sunday night and insisted he would not resign. "This unfortunate matter will in no way affect my commitment to the important work I am doing for this great city," Bradley said after his arraignment in White Plains City Court on a third-degree assault charge... Bradley's wife of seven years, Fumiko, told cops her left middle finger was injured Saturday night when her husband closed a door on her hand... He planned to spend the night at his parents' house, while his wife and two children stayed at their home. His next court appearance is scheduled for Friday... [Full article here]


WHITE PLAINS MAYOR FACING CHARGES AFTER DISPUTE
Mayor Adam Bradley Charged With Misdemeanor Assault In Alleged Domestic Dispute With Wife
CBS
Dave Carlin
Mar 1, 2010
[Excerpts] It was a scandalous Sunday for White Plains Mayor Adam Bradley, who turned himself in to White Plains police and was charged with assaulting his wife. Bradley defended himself in a news conference Sunday night. "I have to set the record straight," Bradley said... His wife, Fumiko, filed a complaint with police saying Bradley slammed her hand in a door during a fight. Bradley was charged with misdemeanor third-degree assault. "I did not in any way mistreat my wife," Bradley said. "There have been problems in my marriage for some time, and I have made many efforts to deal with them. I will not take this opportunity to publicly argue with my wife in a manner that would expose my children to it," he said... Bradley's legal team confirmed the Mayor's wife was granted an order of protection against him, so he is not living here with his wife and children. He is staying at the White Plains home of his parents... "If the mayor is the person being accused, there is a conflict there," [Bradley's opponent Glen] Hockley said. "Obviously you need an independent investigative group to look in to this"... [Full article here]

WHITE PLAINS MAYOR ISSUES STATEMENT ON PAST DOMESTIC INSTANCES
LoHud.com
Ben Rubin and Richard Liebson bfrubin@lohud.com
March 1, 2010
[Excerpts] Responding to "issues being raised in the media," Mayor Adam Bradley today released a short statement to address prior domestic issues in which he was involved... "First, there have been no prior allegations of spousal abuse made against me... Second, questions have been raised about an incident that occurred 10 years ago, prior to my marriage. In that instance, Fumiko and I were harassed by a former girlfriend of mine. It resulted in an order of protection being issued, barring the woman from contacting me"... The mayor was charged Sunday with third-degree assault, a misdemeanor, following his wife's domestic-violence complaint to police that morning. She accused him of grabbing her arm, putting it against a door frame and closing a door on her hand... Bradley declined to give a statement to detectives and was taken to the booking desk, where he was fingerprinted and photographed before he was arraigned before City Judge Brian Hansbury. Bradley was released after Hansbury signed an order of protection on behalf of Fumiko Bradley... Councilman Dennis Power, who has known Bradley for about 25 years, said he supported Bradley "100 percent"... [Full article here]

WHITE PLAINS MAYOR BRADLEY CHARGED WITH ASSAULT
WABC
Sunday, February 28, 2010
Carolina Leid
Web produced by Jennifer Matarese
[Excerpts] ...Bradley is accused of assaulting his wife, Fumiko, Saturday night at the couple's White Plains home. His wife went to the police Sunday morning. The complaint she filed against her husband says that Bradley physically injured her by, "grabbing her left arm and placing her hand against a door frame" and that "with his other hand (he) closed the door on his wife's hand, causing pain and bruising to her left middle finger"... No word yet on what this could mean politically for the mayor... [Full article here]
[public official domestic violence oidv intimate partner violence (IPV) abuse new york]
on 3/03/2010