[FL] Ex feared pressing charges on Officer Nasby, but his department investigated - and fired him 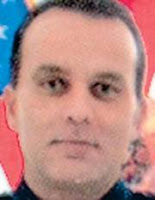 ...[Bunnell Police] Officer Russell Nasby, 45, was terminated Monday following a four-month internal investigation... The woman, who is not being identified because of the nature of the case, declined to press charges or pursue an injunction for fear of retaliation by Nasby... But the complaint prompted Bunnell police to launch an investigation...

OFFICER ACCUSED OF STALKING EX-GIRLFRIEND
Bunnell Police Officer Fired; Report Details Stalking Methods
WJXT Jacksonville
March 11, 2010
[Excerpts] A Bunnell police officer who was fired is facing charges of using his work-issued computer to stalk his ex-girlfriend. The complaints about officer Russell Nasby began in October, according to an Internal Affairs report released by the Bunnell Police Department. The report says an ex-girlfriend told a Flagler County deputy that Nasby was stalking her though e-mails, phone calls and Facebook. The ex-girlfriend refused to press charges, but a subsequent investigation revealed that the veteran officer had performed background checks on his ex-girlfriend, her new boyfriend and the deputy who first investigated the stalking allegations... [Full article here]


BUNNELL COP FIRED FOLLOWING STALKING PROBE
News Journal. Daytona Beach, Fla.
Kari Cobham. pg. C.1
Mar 10, 2010
[Excerpts] A city police officer has been fired after officials say he abused department resources to stalk a former girlfriend and visit banned Web sites. Officer Russell Nasby, 45, was terminated Monday following a four-month internal investigation launched in November. He had been on paid administrative leave since Jan. 29. "I just want to apologize to the city of Bunnell and to remind law enforcement that we're held to a higher standard," said Police Chief Arthur Jones. A teacher at a local elementary school told Flagler County Sheriff's Office investigators in October that her relationship with Nasby ended in July but that he was stalking her on social networking sites, e-mail and by telephone... The woman, who is not being identified because of the nature of the case, declined to press charges or pursue an injunction for fear of retaliation by Nasby... But the complaint prompted Bunnell police to launch an investigation into Nasby's possible misuse of resources to visit banned Web sites and conduct unauthorized searches in the state driver and vehicle database... The woman wrote Nasby an Oct. 26 e-mail asking him not to contact her again, but he did. And in a Jan. 26 e-mail to another Bunnell officer, she said Nasby stopped behind her and her boyfriend in a marked patrol car in a parking lot and drove off soon after while shouting expletives. Nasby was placed on paid administrative leave days later and directed to remain home unless given permission to leave. He also had to check in daily on weekdays and was subject to random checks... [Full article here]
[police officer involved domestic violence oidv intimate partner violence (IPV) abuse law enforcement public safety stalk florida state high tech database professional accountable accountability]
on 3/11/2010