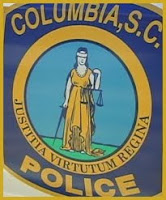 UPDATED:
...We now know it took police 6 hours to get a Columbia police officer [Master Police Officer Paul John Myers] out of his home after being accused of criminal domestic violence... Paul Myers' wife called police and told them she'd been choked...

COLUMBIA MASTER POLICE OFFICER ARRESTED, CHARGED WITH CRIMINAL DOMESTIC VIOLENCE
WLTX
Lauren Talarico
Created: 3/13/2010 8:10:16 PM
Updated: 3/14/2010 3:43:54 PM
Officials with the Columbia Police Department say that their Master Police Officer has been placed on administrative leave after he was arrested for criminal domestic violence. Lt. Matt Davis with the Lexington Police Department says they responded to a domestic violence call at approximately 1:00 Saturday morning. Upon arrival officers arrested MPO Paul John Myers after he allegedly injured his wife during a physical altercation. Police say the victim sustained minor injuries. His wife told the Associated Press Sunday that she called police because she was locked out of her house. She also went on to say that she and her husband had not been arguing, she was not assaulted, and had no injuries. Paul Myers told the AP that he plans to plead not guilty in the case. MPO Myers has been with the Columbia Police Department since November, 2007. Columbia Police Chief Tandy Carter says that Myers has been placed on administrative leave without pay pending the disposition of the charge. Myers bond was set at $5,000 and was released from the Lexington County Jail on Saturday. [LINK]

DETAILS RELEASED IN DOMESTIC VIOLENCE CASE AGAINST CPD OFFICER
WISTV
Mar 15, 2010
COLUMBIA, SC (WIS) - We now know it took police 6 hours to get a Columbia police officer out of his home after being accused of criminal domestic violence. According to the newly-released incident report, 38-year-old Paul Myers' wife called police and told them she'd been choked. Lexington police say they got to the home, knocked and called repeatedly to try to get Myers out. Once they got a warrant, they went in and found him sleeping. The report says he had been drinking before all of this happened. His 6-year-old was also sleeping inside. Myers is on administrative leave from the Columbia Police Department. He's out of jail on bond. However, his wife now says the couple did not argue and he did not touch her.  [LINK]
[police officer involved domestic violence oidv intimate partner violence (IPV) abuse law enforcement public safety south carolina state recant]
on 3/15/2010