[VA] Investgator Canosa identified his wife as his killer. "The b*tch – she shot me in the back." 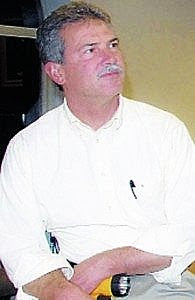 An Orange County sheriff's deputy [Investigator Bob Canosa] killed in December identified his estranged wife [Brenda] as the shooter as he lay mortally wounded... "I asked him who shot him, and his wording was, 'The bitch – she shot me in the back'"... [Brenda] called her estranged husband from her car... When the 55-year-old investigator came outside, he was shot five times...

JUDGE HEARS DETAILS IN SHOOTING DEATH OF ORANGE INVESTIGATOR
Charlottesville Daily Progress
By Allison Brophy
Published: March 1, 2010
Updated: March 2, 2010
[Excerpts] A juvenile and domestic relations judge certified the killing case of an Orange County sheriff’s investigator to the grand jury Monday night, listening to testimony from eight members of local and state law enforcement regarding the Dec. 11 shooting of Unionville resident Bob Canosa. Canosa’s estranged wife, Madison County resident and special education teacher Brenda Canosa, 49, faces charges of first-degree murder and use of a firearm in the commission of a felony. Mr. Canosa, a career law enforcement professional who also worked as an investigator under former Culpeper County Sheriff Lee Hart, died Dec. 20 at the University of Virginia Medical Center from multiple gunshot wounds. He was 55... “There is evidence of an actual murder,” said Orange County Juvenile and Domestic Relations Court Judge Frank W. Somerville at the close of the 2 1/2-hour preliminary hearing Monday night, saying the court would continue to hold Mrs. Canosa without bail in the Central Virginia Regional Jail, a couple of miles from the courthouse on U.S. 15... [Orange County Deputy Seth] Boyd testified Monday that he kicked open the locked door to Mr. Canosa’s residence to find him on his back in bed, bleeding profusely from numerous gunshot wounds to his shoulder, abdomen, throat, chest and back... “I asked him who shot him, and his wording was, ‘The bitch – she shot me in the back.’ I asked him, ‘Who shot you?’ and he said, ‘My wife’”...[Commonwealth's Attorney Diana] Wheeler, in presenting her evidence, said Mrs. Canosa emptied a nine-shot revolver, striking her husband five times... Mrs. Canosa called Mr. Canosa on his cell phone on the morning of the pre-dawn shooting... Orange County Assistant Commonwealth’s Attorney Rick Moore, in his closing remarks, said the test later showed that Mrs. Canosa had gunshot residue on her hands. In defense of Mrs. Canosa, Charlottesville lawyer Dana Slater and Alexandria lawyer Chris Leibig questioned ... [Full article here]

DEPUTY NAMED WIFE AS KILLER
Mortally wounded Orange deputy identified wife as killer, witnesses say
Fredericksburg.com
Robin Knepper
Date published: 3/3/2010
An Orange County sheriff's deputy killed in December identified his estranged wife as the shooter as he lay mortally wounded, according to court testimony... After hearing the testimony, Juvenile and Domestic Relations Judge Frank Somerville certified charges against Brenda Canosa and sent the case to a grand jury, which will be impaneled March 22 in Circuit Court. It will consider indicting her on charges of first-degree murder and use of a firearm in commission of a felony. Brenda Canosa, 49, was denied bond last week... According to testimony, at approximately 5:30 a.m. Dec. 11, she called her estranged husband from her car, which was parked outside the Unionville building where he was staying. When the 55-year-old investigator came outside, he was shot five times... Chief Deputy Tim Murphy, who owned the canine-training facility where Canosa was staying, described how he had found his friend and colleague lying on a bed in an apartment in the building, bleeding from five gunshot wounds. "He was in a great deal of pain and getting gray and weaker by the moment," Murphy said. "I talked to him, trying to keep him awake and calm." But by the time the rescue squad ambulance met the University of Virginia helicopter that landed at Unionville Elementary School, EMS personnel told Murphy to talk to Canosa quickly. "I said, 'Bob, you're dying. Who did this to you?'" Murphy testified. "He said Brenda did. He said she had called him from the driveway and told him to come outside. When I asked him what happened next, he pointed to the bloody hole in his chest... I was down on my knees with his head between my hands. I had my ear over his mouth. It was loud, and he was weak"... The defendant arrived in court Monday night dressed in a gray-striped prison uniform. She smiled and waved with handcuffed hands at friends and family, mouthing "I love you" to her adult children.... [Full article here]
[police officer involved domestic violence oidv intimate partner violence (IPV) abuse law enforcement public safety fatality fatalities murder virginia female jail]
on 3/04/2010