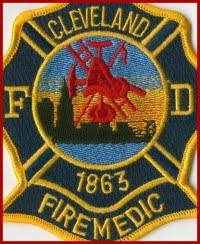 
He's done this beFORE?
CLEVELAND FIREFIGHTER ARRAIGNED TODAY ON DOMESTIC VIOLENCE CHARGES
By Donna J. Miller, Plain Dealer reporter
March 30, 2010, 9:48AM
The 47-year-old fire lieutenant arrested Sunday morning faces three misdemeanor charges and a drug abuse citation for marijuana. Michael Fallon was charged Monday with domestic violence, threats of domestic violence and endangering children. He was arraigned this morning in Cleveland Municipal Court, pleaded not guilty and was released after paying 10 percent of a $12,500 bond. He was ordered to stay away from his family... The firefighter and his wife argued at a party. He left and went to a bar. He got home just before 3 a.m. and assaulted his wife. Their children helped her force him outside, but he kicked open the door. Someone called police to report a disturbance. When officers arrived at the house in the 4700 block of Marcie Avenue, they found the firefighter struggling near the broken door with his 14-year-old son... Public Safety Director Martin Flask said in a news release that the lieutenant "may face internal disciplinary action for his conduct." Fallon has misdemeanor convictions for assault and a housing code violation. He is due back in court April 6. [Full article here]