[AR] Officer Nathan Coy - fired for dv from one department & hired by another says, "Watch This!" 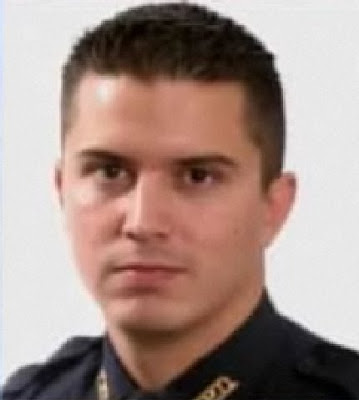 ...Prior to working for Johnson police, [Nathan] Coy was employed as a corporal for the Fayetteville Police Department. He was terminated from the department in May of last year, following an altercation involving a woman at his residence... [Timothy] Shepard has been employed by the Fayetteville Police Department for about a year. He was previously employed by West Fork police... During an interview with investigators, Shepard stated that Coy had been driving at the time of the accident... Shepard said Coy said, "Watch this." Coy then accelerated rapidly, the report stated, before crashing his vehicle into a tree... The occupants of the vehicle had fled...

Johnson Police Department thought hiring a cop fired for criminal acts was a good idea? If they think that could a woman abused by Coy call the local police for help? Absolutely not!

Which department will hire him next?
(UPDATE: Castle Hills Police Department did.)
OFFICERS UNDER INVESTIGATION IN HIT-AND-RUN
4029tv.com
POSTED: March 11, 2009
UPDATED: March 12, 2009
[Excerpts] Two area police officers are under investigation on suspicion of their involvement in a hit-and-run crash. Fayetteville Police said Fayetteville officer Timothy Shepard, 26, and Johnson Police officer Nathan Coy, 31, were in a pickup truck that hit a tree on Gregg Street near Frisco Avenue in Fayetteville early Wednesday morning... "Obviously police officer holds a higher standard whether they’re on duty or off duty," said Greg Tabor, Fayetteville Police Chief... Coy was the driver... The day after the accident, Coy resigned from the Johnson Police Department citing personal obligations. Coy is also a former Fayetteville Police officer and he was terminated last year after he was accused of domestic violence. [Full article here]

POLICE INVESTIGATING OFFICER FOLLOWING ACCIDENT
Northwest Arkansas Times
BY KATE WARD
March 11, 2009
[Excerpts] A Fayetteville police officer is under investigation and a part-time Johnson police officer resigned last week after being involved in a hit-and-run accident in Fayetteville while they were off-duty. The Fayetteville Police Department is conducting an internal investigation to determine if officer Timothy Shepard violated any laws or policies when he fled the scene of an accident. "Our officer was obviously off duty, as was the driver," Fayetteville Police Chief Greg Tabor said. "He hasn't been placed on administrative leave as of now." The driver, 31-year-old Nathan Coy, submitted his official letter of resignation from the Johnson Police Department on March 5. "He was not forced to resign," Johnson Police Chief Vernon Sisemore said. "He did it on his own accord due to personal obligations and the fact that he was thinking of relocating to get away from this area"... Witnesses reported that a black 2004 Toyota Tacoma struck a tree and was blocking traffic... The occupants of the vehicle had fled the scene prior to officers' arrival... both the driver and passenger doors of the truck had been left open. Officers reported finding a large amount of blood in and around the driver's seat of the vehicle. The trail of blood led officers to the South Creekside Apartments... Upon further investigation, officers learned that the tags on the suspect's vehicle returned to Coy. "Apparently he had an accident and caught a ride home from his girlfriend," Sisemore said... During an interview with investigators, Shepard stated that Coy had been driving at the time of the accident... Shepard said Coy said, "Watch this." Coy then accelerated rapidly, the report stated, before crashing his vehicle into a tree... Police later located Coy at his home. He had suffered lacerations to his face and head and was transported to the Washington Regional Medical Center. Police said they asked to conduct a blood-alcohol test, but Coy refused. "I'm not sure if he was drinking at the time of the accident or not, but I do know he had some alcohol after he got home for some reason," Sisemore said. "Our involvement in this case was minimal since it happened in Fayetteville"... Prior to working for Johnson police, Coy was employed as a corporal for the Fayetteville Police Department. He was terminated from the department in May of last year, following an altercation involving a woman at his residence on May 6. The incident prompted the woman to file for and receive a temporary order of protection against Coy. An internal investigation conducted by the Fayetteville Police Department found that Coy was in violation of the department's policies, rules and procedures regarding private life, unbecoming conduct and integrity. The investigation further found Coy's conduct in violation of the Fayetteville Civil Service Rules and Regulations for violating any department rule and or a federal, state or local law. Fayetteville city prosecutor Casey Jones and Washington County prosecutor John Threet concluded that Coy's involvement in the altercation contained elements for a potential filing of domestic battery charges. Coy appealed his termination to the Civil Service Commission, but commissioners upheld Tabor's decision... Shepard has been employed by the Fayetteville Police Department for about a year. He was previously employed by West Fork police. [Full article here]
[police officer involved domestic violence oidv intimate partner violence ipv abuse law enforcement public safety cop hop hopping gypsy cop alcohol drunk repeat hx arkansas state politics]
on 3/12/2009