[NY] Linda Curley has been heard. Ex-Officer Curley is convicted. 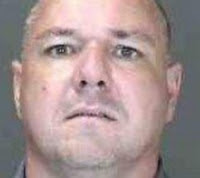 ..."He started banging my head on the floor as if to accentuate what he was saying," she said... James Curley, 44, of Suffern, N.Y., in the summer of 2006 told his estranged wife on multiple occasions he was going to kill her... Testimony also was given about the GPS tracking device which James Curley is charged with putting in Linda Curley's car... The Town Board fired Curley last year after a hearing but a state judge rescinded the decision based on technical errors...

WIFE SAYS EX-RAMAPO COP VIOLENT FOR YEARS
The Journal News
By Timothy O'Connor
March 10, 2009
[Excerpts] The estranged wife of a former Ramapo police officer said yesterday that she endured years of abuse at his hands. Linda Curley, 40, testified during the first day of the federal domestic violence trial of James Curley, 44, that she feared for her life... "I really, really think he's going to kill me," Linda Curley said to a Ramapo police sergeant during a call in July 2006 after she reported being followed by her husband in a car. A recording of that call was played for a federal jury in White Plains yesterday... James Curley returned home to their apartment one night in 1991 after a night out drinking. He was angry with her - she said he angered easily over minor incidents. He threw her down on a wood floor, she said. "He started banging my head on the floor as if to accentuate what he was saying," she said... [Full article here]

JAMES CURLEY HAS EXPERIENCED MUCH SUCCESS IN LEGAL MATCHES AGAINST RAMAPO FOR NEARLY TWO DECADES.
Completely Legal - http://completelylegal.lohudblogs.com/
Posted by Rebecca Baker
Wednesday, March 11th, 2009 at 10:51 am
[Excerpts] He’s been on disability leave from the police department with full pay and benefits for most of the past 19 years... Curley could face a disciplinary hearing after the criminal trial as town officials and ranking police officials look to fire him from the police department. A criminal conviction means automatic dismissal, though he could always file a lawsuit. Curley has been held in federal custody since June “as a danger to the community and as a “flight risk” on orders from Robinson. The judge’s no-bail decision came after he viewed a DVD provided by federal prosecutors that showed Curley fleeing New Jersey police officers trying to arrest him, with one officer getting hurt... The Town Board fired Curley last year after a hearing but a state judge rescinded the decision based on technical errors... The pending disciplinary charges involves issues with his wife and violating department policy. He also faces disciplinary charges from his arrest in New Jersey... Curley has claimed he could have returned to work at some point in the 1990s but town officials didn’t want him back. [Full article here]

STALKING CASE AGAINST FORMER RAMAPO COP CONTINUES
By The Journal News
Steve Lieberman
March 16, 2009
[Excerpts] ...Linda Curley's demeanor went from happy and cheerful to nervous and jumpy after her husband James Curley, a former Ramapo police officer, filed for divorce in July 2006, according to their day-care provider... [The daycarae director] said that after the papers were filed, Linda Curley said she feared for her life, that her husband had been verbally and at times physically abusive. "She told me she was afraid he was going to kill her, and that if she disappeared, it was probably him," Debellis said, testifying that Linda Curley told her she had been afraid to go to the police because her husband was a police officer. Testimony also was given about the GPS tracking device which James Curley is charged with putting in Linda Curley's car. He maintains he put the device in her car because he thought she was having an affair and wanted to get evidence for the divorce case. The prosecution showed that James Curley and Edward Holland checked the GPS information online. Holland had ordered the tracking device and its computer software for James Curley. The trial will continue this afternoon, with the prosecution planning to show video of James Curley's arrest... [Full article here] t['

FORMER RAMAPO POLICE OFFICER FOUND GUILTY OF STALKING ESTRANGED WIFE
by The Star-Ledger
Friday March 20, 2009, 2:00 PM
[Excerpts] A former Ramapo police officer was found guilty Thursday on two counts of stalking and one count of violating a protection order when he harassed his estranged wife and threatened to kill her in 2006, according to the U.S. Attorney of the Southern District of New York. Authorities said James Curley, 44, of Suffern, N.Y., in the summer of 2006 told his estranged wife on multiple occasions he was going to kill her. According to authorities, Curley told his estranged wife on one occasion he would leave her in a pool of her own blood, and on another occasion told her he had found place to kill her where no one could hear her scream. Curley faces a maximum of 15 years for all three counts and is scheduled to be sentenced on June 25... The sentence came after an eight day trial in White Plains, N.Y., before United States District Judge Stephen C. Robinson. [Full article here]
[police officer involved domestic violence]
on 3/24/2009