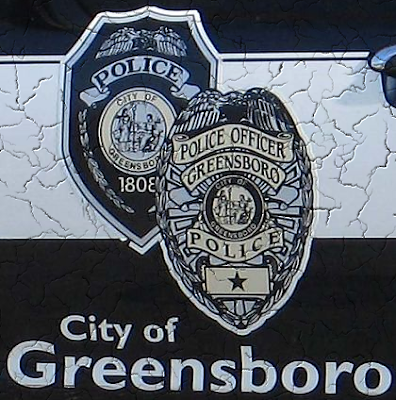 This officer is reported to have attacked two women and was not arrested that night.

[Excerpts] ....[Greensboro Police Officer Ahmed Joseph "AJ"] Blake’s two-week sentence will be suspended for three years... The assaults were said to have occurred as the party was ending... Blake allegedly hurls racial slurs at his Hispanic girlfriend. Does this make it a hate crime?... How many drunk police had their firearms that night? If a cop assaults his wife or girlfriend they are supposed to be arrested on the spot. There are no rules allowing anything else....
Sometimes I have to doubt myself. I went reading around the internet on this (dare I say drunken?) double assault, and I keep thinking "Am I understanding this?" Greensboro Officer Ahmed Joseph Blake attacks his girlfriend outside of the private Police Club at 4 in the morning - but the initial police report doesn't even mention her. It names as the only (#1) victim another woman - a 20 year criminal justice professional - who was attacked by Blake when she tried to intervene. And the police report says no alcohol was involved? Really? Who could think that? And the initial police report says simple assault instead of the required (and unconstitutional) "assault on a female"? Was the officer writing the report a friend of Blake's - or was that just the standard (and expected in Greensboro?) brotherhood courtesy?

Notice that Blake's girlfriend, her safety, her support - are not mentioned here.

I-SPY a police department sorely in need of a specific policy for handling officer-involved domestic violence - a policy to be followed.

CITY OFFICER FOUND GUILTY OF ASSAULT
Greensboro News Record, NC -
By Sonja Elmquist sonja.elmquist@news-record.com
Saturday, March 21
A Greensboro police officer was found guilty of two counts of assault on a female Friday in Guilford County District Court. In delivering his verdict, Chief District Court Judge Joseph Turner said he also was disappointed in the police leaders at the party for allowing the apparently alcohol-fueled assaults to take place. “Reluctantly and sadly, I find you guilty on both charges,” Turner said to officer A.J. Blake. Blake was accused of grabbing, pushing and kicking his girlfriend and of grabbing another officer’s girlfriend by her neck. The party, attended mainly by police and their spouses or dates, was held Jan. 16 at the Greensboro Police Club... The assaults were said to have occurred as the party was ending early Jan. 17. Blake’s two-week sentence will be suspended for three years as long as Blake completes a domestic violence training course and commits no further assaults on his girlfriend Sandra Sanchez or Lorraine Galloway. Blake also may lose his ability to work in law enforcement because the N.C. Training and Standards Commission does not allow anyone with a domestic assault conviction to be a law enforcement officer. Blake’s attorney, Ken Free, notified Turner after the sentencing that he would appeal the decision to Superior Court. All the witnesses called who had been at the party testified they had been drinking and that Blake and Sanchez had an argument. Officer C.M. Schultheis and Galloway, both guests at the party, testified they saw Blake assault Sanchez as the pair was leaving the party. Schultheis said he saw Blake push Sanchez’s back and Galloway said she saw Blake kick Sanchez outside of the police club. Sanchez said she had not been assaulted but had stumbled outside of the club when her high-heeled shoe became stuck between wooden planks on the porch. A crime scene investigator testified she hadn’t seen any dirt or marks on Sanchez’s white jacket or any bruises to indicate she had been kicked. But Turner said he didn’t find Sanchez to be credible. Galloway said Blake turned on her when she remarked on the kick she saw him deliver to Sanchez. “I stood in the doorway and said, 'You’re not going to do that anymore,’” Galloway said. “He turned toward me and that’s when he grabbed me by the throat — he had a strong grip — and threw me back into the police club building”... [Full article here]

AND WE CAN'T GET THE FULL STORY WITHOUT HELP FROM THE TROUBLEMAKER BLOG
"A better journalist than the entire News & Record staff combined."
YES! Weekly, 03/28/2007

Greensboro Police Officer Down!
The Troublemaker
Monday, January 19, 2009
[Excerpts] Greensboro Police Officer Ahmed J. Blake had his gun and his badge taken from him this weekend... Police reports show that someone called 911 from the Police Club on Saturday at 4:13pm... Blake is a party to a lawsuit alleging discrimination against African-American officers by David Wray and Randall Brady... This latest suspension took place one day after a press conference was held by City Council members Mike Barber and Trudy Wade. At that conference, Barber reported that the police department had some "potato heads" that were making the entire department look bad. [Full post here]

Ahmed Blake Allegations.
The Troublemaker
January 19, 2009
[Excerpts] If Mr. Blake was just a citizen and not a police officer he would have probably been arrested... The alleged argument turns physical and Blake allegedly hurls racial slurs at his Hispanic girlfriend. Does this make it a hate crime? During the alleged scuffle between Blake and his girlfriend another woman (who was there as a date for Greensboro Police SGT. Craig Myrick) jumps in to stop Mr. Blake. When this alleged attempt to stop the alleged scuffle took place, Mr. Blake allegedly pushed Myrick's date to the floor. Myrick's date allegedly works for the NC Justice Academy. What happened next? Blake is not arrested but C.I.D. is allegedly called to the Police Club to investigate what happened. If that would have been a regular citizen, he would have been taken to jail and charged with something... [Full post here]

City and News and Record Play Along.
The Troublemaker
January 20, 2009
[Excerpt] ...The A.J. Blake story was broken as a world exclusive on the Troublemaker on Monday, January 19th, prompting the City of Greensboro to release information to the public the next day, Tuesday, January 20th, at which time the lame and last place News & Record regurgitated the press release, thus establishing the continued dominance of the Troublemaker... [Full post here]

Ahmed Blake
The Troublemaker
January 20, 2009
[Excerpts] The most recent allegations regarding the assault are as follows.
1. There was a birthday party at the police club.... There was excessive drinking... There were drinking games played... There is no word reporting lots of designated drivers...
[Full post here]

More details in the Ahmed Blake assault case!
The Troublemaker
January 21, 2009
[Excerpts] ...SGT. Craig Myrick's (NC Justice Academy) date went outside and noticed the altercation and decided to break it up. When she became involved in the altercation, Blake assaulted her. Blake was intoxicated when the incident took place. After the assaults took place police were called and SGT. Norman Rankin came to the Police Club to deal with the situation. How he dealt with the situation is not clear at this time. However, there are several rules that need to be talked about. Police cannot become intoxicated outside of their home while they have their firearm. How many drunk police had their firearms that night? If a cop assaults his wife or girlfriend they are supposed to be arrested on the spot. There are no rules allowing anything else... It has also been rumored that some high ranking police attended this party. [Full post here]

AND TO GET MORE ON GPD'S HANDLING OF THIS, I WENT TO THE YES! WEEKLY BLOG

More on alleged Blake assault
The Yes Weekly Blog
January 22, 2009
[Excerpts] A GPD incident/investigative report alleges that Officer Ahmed Blake assaulted Lorraine Galloway, 46, with his hands and feet at the Police Club at 524 Air Harbor Road in Greensboro on Jan. 17 at 4:49 p.m. Galloway is employed with the NC Justice Academy, a unit of the NC Justice Department, in eastern North Carolina... A warrant, served on Blake on Jan. 20, alleges that the off-duty officer grabbed Galloway around the neck and shoved her backwards... [Full post here]

SO...
FROM THE INITIAL REPORT:

REPORT TIME 4:49 IN THE MORNING - LOCATION THE POLICE OFFICER'S CLUB

WHO WILL BELIEVE THAT NO ALCOHOL WAS INVOLVED? DO YOU? THEY ARE OUT CLUBBING UNTIL THE WEE HOURS AND BLAKE DIDN'T DRINK? HE JUST ATTACKS WOMEN IN PUBLIC, AT THE POLICE OFFICER'S CLUB SOBER? THERE'S A GOOD CHANCE HE COULD HAVE SPENT AS MUCH AS 7 HOURS DRINKING! 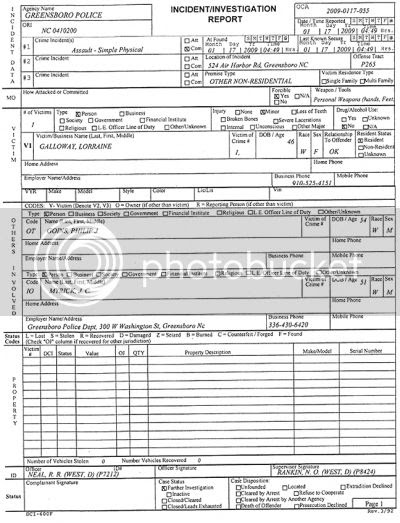 ONLY SIMPLE ASSAULT, NOT THE (UNCONSTITUTIONAL) "ASSAULT OF A FEMALE" CHARGE THAT THE ATTACKS DEMANDED 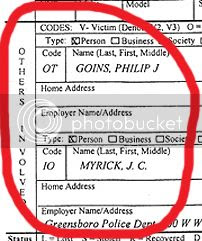