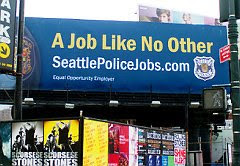 ...The woman-who works with the US Attorney's office-says the officer has physically intimidated her and sent her threatening text messages, including one that read, "The games have begun now, have fun"...

PROTECTION ORDER FILED AGAINST SEATTLE POLICE OFFICER
The Stranger
Posted by Jonah Spangenthal-Lee
Friday, March 27, 2009
A King County Superior Court commissioner has granted a Lynnwood woman a temporary protection order against her husband, a Seattle Police Department officer. According a court filing, the couple separated two weeks ago. Since then, the woman says the officer has exhibited "intimidating" behavior and that his "statements and actions are becoming increasingly more erratic and unpredictable"... The woman-who works with the US Attorney's office-says the officer has physically intimidated her and sent her threatening text messages, including one that read, "The games have begun now, have fun." The woman also claims the officer told her he would "stop paying any bills and see that [the woman and her 4-year-old son]…were homeless... He is very aware of how far he can go before he could 'get in trouble'. I feel that he uses that knowledge to intimidate me," the woman wrote in her filing. The officer has been with SPD for five years, and was previously involved in the shooting of a 13-year-old boy in the Central District, after the teen pulled out a cell phone, which the officer believed was a gun... Seattle Police Department spokesman Sean Whitcomb says the department is aware of the protection order and is monitoring the situation. "At this point and time, this appears to be strictly civil and we are not taking any action," Whitcomb says. On Monday, Seattle Police officer Scott Moss was charged with assaulting his wife in their home near Sammamish. According to a statistics from the National Center for Women and Policing, domestic violence occurs at least 40% of law enforcement families. [Full article here]
on 3/27/2009