[IN] Deputy Eghan & the woman he shacks with so rightly arrested 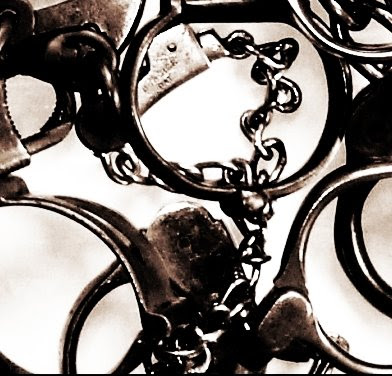 ...[Marion County sheriff's deputy Sydney] Eghan cuffed the boy's hands behind his back, using a method that most officers wouldn't use on a prisoner... Police say as the boy moved his hands, the cuffs got tighter... According to police reports, the boy's arms and wrist were swelling... [His mother Betsy] Chestnut called 911, not to ask for medical help, but calling to speak to her fiance...

DEPUTY ARRESTED FOR LEAVING BOY IN CUFFS
MarketWatch
Last update: 11:29 a.m. EDT March 8, 2009
[Excerpts] Police allege a 12-year-old Indianapolis boy was handcuffed for six hours by a Marion County sheriff's deputy who wanted to teach him a lesson. The boy would have remained in handcuffs longer had his mother not called 911 to say the cuffs had tightened and were cutting off circulation to her son's arms, said Sgt. Matthew Mount of the Indianapolis police. "He was in some pretty serious pain," Mount said. Deputy Sydney S. Eghan, 24, and Betsy Chestnut, 30, the boy's mother, were arrested Saturday and charged with child neglect, The Indianapolis Star reported Sunday. Eghan and Chestnut are engaged and share a home with the boy, said Mount, alleging Chestnut agreed to let Eghan handcuff the boy, arms behind his back, for stealing a cell phone from a family friend... [Full article here]

POLICE: CORRECTIONS OFFICER, FIANCEE HANDCUFFED BOY 6 HOURS
Couple Say They Were Disciplining Boy
theindychannel
POSTED: 8:11 pm EST March 7, 2009
UPDATED: 10:22 pm EDT March 8, 2009
[Excerpts] Investigators said the couple handcuffed Chestnut's son for more than six hours as a discipline measure, leaving him alone for nearly two hours of that time. "He tried to sleep, he couldn't. He couldn't use the restroom, he wouldn't be able to call for help with the telephone because the fact that his hands were behind his back," said Lt. Jeffrey Duhamell... Eghan and Chestnut were arrested that their home. The children were put in the care of child services... [Full article here]

MARION CO. JAIL DEPUTY, GIRLFRIEND ARRESTED
WTHR-TV
Richard Essex
March 8, 2009
updated less than 1 minute ago
[Excerpts] ...Police say 24-year-old Sydney Eghan used his department-issued handcuffs on his girlfriend's 12-year-old son. He cuffed the boy behind his back around 8 p.m. Friday and left for work at the Marion County Jail. The boy's mother, 30-year-old Betsy Chestnut, told police that Eghan handcuffed the boy as punishment... "The mother explained to him that what he had done was stolen the cell phone and wanted him to be taken to juvenile," IMPD Sgt. Matt Mount said. "Her fiance, who is also a Marion County corrections officer, stated no, they would take care of it there in house." Investigators say Eghan cuffed the boy's hands behind his back, using a method that most officers wouldn't use on a prisoner. "It appears that he failed to double-lock the handcuffs," Sgt. Mount said. "It's what's normally done when handcuffs are placed on a prisoner. That makes sure that those handcuffs cannot tighten down any further." Police say as the boy moved his hands, the cuffs got tighter and became painful. He woke up around 2 a.m. crying, asking for help. "[The boy] was suffering some pretty serious pain from some handcuffs that had been placed on his wrist, but worked their way up to the forearm to the point the mother was not able to move them," said Sgt. Mount. According to police reports, the boy's arms and wrist were swelling and the pain kept him from sleeping... Chestnut called 911, not to ask for medical help, but calling to speak to her fiance. The dispatcher sent officers to the house anyway. The Marion County Sheriff's Department says they're launching their own internal investigation, since Eghan was one of their employees. They plan on looking into the incident and Eghan's personal car... Police lights are stacked and fastened inside the windshield and rear window of Eghan's personal Honda. His badge of authority is also in clear view in the front seat... [Full article here]
on 3/08/2009