[MS] Who will believe this Mississipi victim before she is killed? 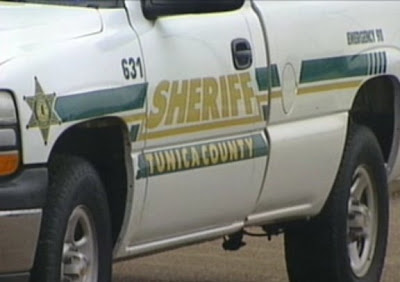 
WOMAN CALLS COPS ON DEPUTY BOYFRIEND
March 13, 2009
(Tunica, MS) A Tunica woman called 911 Sunday morning, telling the dispatcher her deputy boyfriend came home drunk and pulled a gun on her. But tonight he's not the one in trouble with the law... she is. Deputy Eric Russell is on paid administrative leave for breaking department policy. A spokesperson for the department says what his girlfriend told a dispatcher during a 911 call early Sunday morning wasn't completely true. 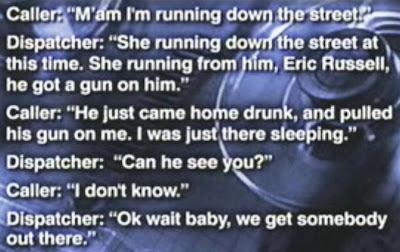 Caller: "Can I get a deputy to 1460 Jacks Avenue, one of the officers got a gun on me." Caller: "He just came home drunk, and pulled his gun on me. I was just there sleeping."
Dispatcher: "Can he see you?"
Caller: "I don't know."
Dispatcher: "Ok wait baby, we'll get somebody out there." Caller: "This is not the first time."
Caller: "I had talked to (inaudible) to talk to him to get him to stop drinking like that, because every time he get drunk he pull his gun on me."
An officer arrived and questioned both Deputy Russell and his girlfriend. "They searched his vehicle, there was no weapon in the vehicle," said Tunica County Spokesperson Larry Liddell. However, he says the officer noticed the off-duty deputy had been drinking. "He smelled alcohol on the officers breath. At that point that's when he was put on administrative leave," said Liddell. He says the deputy had also been behind the wheel, but wasn't asked to take a breathalyzer. We asked why not? "That was the officer's decision," said Liddell. He says the 4-year veteran deputy broke the department's alcohol policy, but did not break the law. On or off-duty, he says, "You can't become intoxicated. Not as long as you're a member of the Tunica County Sheriff's Department." 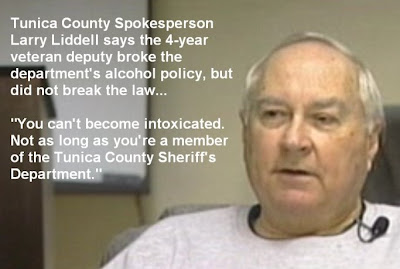 Meanwhile, Liddell says it's Russell's girlfriend who will be charged with filing a false report, accused of making up a story to get her boyfriend in trouble. Russell's girlfriend couldn't be reached for comment. Deputy Russell is on paid administrative leave for now. He will be required to complete an alcoholic's anonymous course before he can return to work. [LINK] 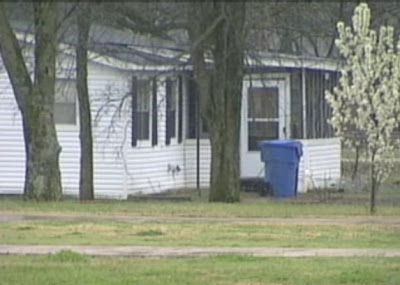 I live in a state, in a town, where no one believed the wife of a law enforcement officer - or didnt care if it was the truth - until she took a shot to the head, lingered in the hospital for a week, and then died. After she was shot there was a chorus of folks saying to her - though she could no longer hear - "We believe you."

I believe this woman now.

I gathered this story a couple of days ago and it's been haunting me. Who can she turn to? And she's in Mississipi? Do you know how far Mississipi is from being progressive about officer-involved domestic violence. I'm the story-keeper so I will tell you: It won't happen in our lifetimes.

who feel hopeless and are sitting frozen in harms way, numb - that they

prepare their strength, and

where there really appeared to be none.