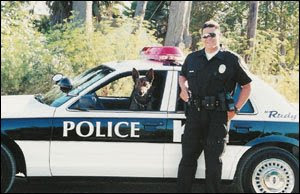 A former sheriff’s deputy who owns a Ventura home where an ex-Oxnard police officer was found fatally stabbed this week has retained a lawyer. Claudia Valenciana had not been arrested or named as a suspect in the slaying of Robert Perez Jr., 37, but she believes police are looking at her as a suspect... Valenciana was formerly engaged to Perez, and he once lived with her. Bamieh said Perez abused Valenciana and they were no longer engaged...

FORMER OXNARD POLICE OFFICER STABBED TO DEATH
KEYT
Mar 2, 2009
[Excerpts] A former police officer with Oxnard Police Department was died from stab wound Monday morning in the city of Ventura. When Ventura Police arrived to the 1500 block of Daffodil Avenue, they found 37-year-old Robert Perez had been stabbed once in the chest. Perez was rushed to Ventura County Medical Center where he died while undergoing surgery. Perez served over 200 days in Ventura County Jail after holding his girlfriend hostage at his Oxnard home in July of 2007. That incident required a SWAT Team response... [Full article here]

FORMER OXNARD POLICE OFFICER FATALLY STABBED
Ventura County Star
Monday, March 2, 2009
[Excerpts]A former Oxnard police officer who recently spent time in jail for domestic violence was fatally stabbed Monday in Ventura, authorities said. Ventura police responded to a report of a stabbing victim inside a home in the 1500 block of Daffodil Avenue and found Robert Perez Jr., 37, in the foyer by the door... A resident of the home called 911... Neighbors said Perez lived in the home... The house is about a mile from the home where Perez was involved in a standoff with Ventura police on July, 29, 2007, that led to his arrest and conviction for assault with a firearm, dissuading a witness from reporting a crime and causing bodily harm to a spouse of a co-habitant. Perez was accused of holding a gun to the head of his then-live-in girlfriend, also an Oxnard police officer, assaulting her and refusing to let her leave the house following an argument... Perez was released from Ventura County Jail on Jan. 5, 2009... Anyone with information about the stabbing should call Ventura police at 339-4328 or 339-4462 [Full article here]

SLAIN EX-OFFICER A GOOD PERSON, MOURNERS SAY
Ventura County Star
By Adam Foxman
Wednesday, March 4, 2009
[Excerpts] As Ventura police continued investigating the fatal stabbing of Robert Perez Jr. this week, relatives and friends of the former Oxnard police officer recalled him as a good cop and father with a soft side that belied his tough exterior. Mourners said they hoped people would remember Perez’s good qualities rather than the high-profile domestic violence conviction that upended his life. Perez’s mother, Stella Perez, said he was a good community servant for 12 years... Attorney Mark Pachowicz, who defended Perez at his criminal trial last year, said police officers he interviewed who knew Perez really liked him... Perez was accused of holding a gun to the head of a live-in girlfriend, Oxnard Police Officer Denise Shadinger, assaulting her and refusing to let her leave the house after an argument. Perez denied the allegations. He was later convicted of assault with a firearm, dissuading a witness from reporting a crime and causing bodily injury to a spouse or co-habitant. He was sentenced to 270 days in jail. Perez was released Jan. 5 from Ventura County Jail. Perez’s legal troubles continued after his release. He and Shadinger were involved in a legal dispute over a Ventura house they purchased together in 2004, court records show. Shadinger also had a restraining order against Perez, according to court documents. Shadinger was shocked to learn of Perez’s killing, said her lawyer in the civil lawsuit, Richard Rodgers. Perez’s mother declined to discuss the domestic violence case, calling it a “bad streak” in his life. She focused on the positive, saying Perez was a good father to his 16-year-old son and a thoughtful son himself. Perez supported her when she struggled with cancer and came to Banning to care for his father, Robert Perez, after he had knee surgery, his mother said... A pickup truck registered to Perez was parked in the driveway of the Daffodil home Monday afternoon, and a sport utility vehicle registered to former sheriff’s deputy Claudia Valenciana was parked on the street in front. Valenciana owns the home, according to property records. Neighbors said Perez was living at the home, but police would not confirm that... [Full article here]

EX-FIANCÉE HIRES ATTORNEY AFTER PEREZ STABBING
Former officer slain at Valenciana's home
Ventura County Star
By Adam Foxman
Thursday, March 5, 2009
[Excerpts] A former sheriff’s deputy who owns a Ventura home where an ex-Oxnard police officer was found fatally stabbed this week has retained a lawyer. Claudia Valenciana had not been arrested or named as a suspect in the slaying of Robert Perez Jr., 37, but she believes police are looking at her as a suspect, said her attorney, Ron Bamieh. “When somebody is killed in your house, you’re automatically a suspect,” Bamieh said Wednesday. “We’re all familiar with how the system works.” Valenciana was formerly engaged to Perez, and he once lived with her. Bamieh said Perez abused Valenciana and they were no longer engaged. He would not comment on whether they were still living together... Bamieh said he couldn’t answer questions about details of the killing or discuss specific communications with Valenciana. “She’s not guilty of murder or any levels of murder,” said Bamieh, who also represents the Ventura County Star. Valenciana and Perez were engaged, and police responded at least once to a domestic dispute between them at the home, according to a federal lawsuit she filed last year alleging Sheriff’s Department officials illegally ordered her to cut off contact with Perez. Perez was convicted last year of domestic violence against a previous live-in girlfriend and got out of jail in January. Bamieh alleged Valenciana’s relationship with Perez played a role in her recent firing from the Sheriff’s Department... In the lawsuit filed July 21, Valenciana says superiors ordered her on May 5 to “discontinue any relationship or contact” with Perez or risk being disciplined or fired. About the same time, Perez was on trial for charges including false imprisonment, domestic violence and assault with a deadly weapon in connection with a July 29, 2007, domestic dispute with a previous live-in girlfriend, Oxnard police officer Denise Shadinger. That dispute led to a standoff with Ventura police and Perez’s arrest. Valenciana’s suit was withdrawn on Aug. 8, three days after Perez was found guilty of assault with a firearm, dissuading a witness and causing bodily harm to a spouse or co-habitant... The order that sparked Valenciana’s lawsuit was based on a Sheriff’s Department rule that prohibits employees from fraternizing or developing personal relationships with anyone in custody or previously involved in criminal activity... Valenciana alleged in the suit that she signed the order under duress because she feared for her job. She said she tried to comply with the order, but it caused her emotional and physical hardships. She claims the order violated her 14th Amendment right to free association. The county did not respond to the lawsuit because it was dismissed before an answer was due, said Assistant County Counsel Thomas Temple... Ventura police responded to a reported domestic dispute at Valenciana’s home on April 24, but she told responding officers she was just yelling into the phone and at her son, said Ventura police spokesman Sgt. Jack Richards. No charges were filed in the incident. Bamieh said Valenciana’s failure to cooperate with the investigation of that incident apparently contributed to disciplinary actions and her ultimate firing. He said his own investigation indicates Valenciana was abused throughout her relationship with Perez. He criticized the Sheriff’s Department’s handling of the April case. “They treated her not like a victim but like a suspect,” Bamieh said. [Full article here]
on 3/06/2009