[MN] HUGE Ex-Trooper Andrescik's girlfriend: "I cannot risk my life like this anymore..." 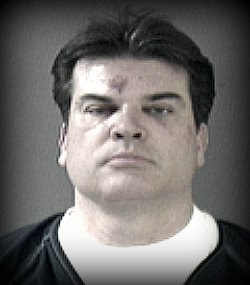 ...The girlfriend allegedly told deputies that she has received about 25 black eyes from Paul... He is charged with two counts of misdemeanor domestic assault: to intentionally inflict or attempt to inflict bodily harm on another; and to

or death...
EX-CARVER CITY COUNCIL MEMBER GUILTY OF ASSAULT
Minneapolis Star Tribune
Mar 5, 2009
[Excerpt] A former Carver City Council member and retired state trooper has pleaded guilty to misdemeanor domestic assault of a woman and will be sentenced to 10 days in jail, the Carver County attorney's office said Thursday. The plea by Paul S. Andrescik, 44, involves an assault on Sept. 6. As part of the agreement, a domestic assault charge is being dropped against Andrescik from another incident on Feb. 4 involving the same woman... [Full news item here]

...They found the alleged victim sitting in a closet, “balled up on the floor in a fetal position”...

FORMER CARVER COUNCILOR CHARGED WITH DOMESTIC ABUSE
Chaska Herald
Mark Olson
February 11, 2009
Paul Andrescik, 44, a former Carver city councilor and retired state trooper, was recently released on bail from Carver County Jail, following charges of domestic abuse. The recent charges of misdemeanor domestic assault follow a domestic abuse charge filed last September at the Carver County Government Center... Andrescik’s girlfriend was the alleged victim in both cases... Carver County Sheriff’s Deputies responded to Andrescik’s 710 Debbie Lane address in Carver at 10:52 p.m., Feb. 4, following the latest report of domestic assault. Once at the residence, they spoke with the 34-year-old girlfriend, who “broke down crying and stated she needs to do something or she will end up being killed,” the report stated... The authorities learned about the alleged assault from Southern Valley Alliance for Battered Women. A friend of Andrescik’s girlfriend had contacted the agency after receiving a text message that stated, “OMG Paul just beat the crap out of me. I had to kick his windshield and forehead to get him off me. He threw me out on the ice while the truck was moving [My child] and I are packing. I cannot risk my life like this anymore,” the complaint reported. Police found Andrescik’s vehicle at a Chaska motel, with the passenger side of the windshield smashed. Authorities knocked on the door and announced he was under arrest for domestic assault, however, “After 30 minutes, the defendant would not open the door.” Andrescik was later taken into custody. He is charged with two counts of misdemeanor domestic assault: to intentionally inflict or attempt to inflict bodily harm on another; and to commit an act to cause fear of immediate bodily harm or death... In a Sept. 6, 2008, incident, deputies responded to Andrescik’s home at about 1:30 a.m., following a report of domestic abuse against the same woman. They found the alleged victim sitting in a closet, “balled up on the floor in a fetal position.” The girlfriend allegedly told deputies that “she has received about 25 black eyes from Paul since July of 2007 with the most recent occurring on Thursday of last week” and that he “put a gun in her mouth last October,” the complaint stated. Deputies observed bruising on her lower back and upper thigh...
Following taking the victim’s report, the deputies placed Andrescik under arrest, using two sets of handcuffs due to his size...
According to his election biography, Andrescik served 16-1/2 years as a state trooper, retiring with the rank of station sergeant. His duties included executive protection detail, guarding Lt. Gov. Joan Benson. [Full article here]
on 3/11/2009