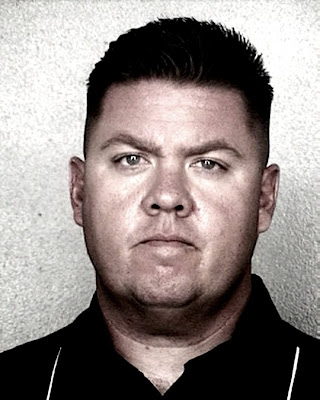 2 DAVIE POLICE OFFICERS ARRESTED
Men Charged In Separate Cases
Just News
March 27, 2009
[Excerpts] Two Davie police officers have been arrested in the last eight days in connection with separate incidents. Stephen Olenchak, 34, a 12-year veteran of the Davie police force, was arrested Thursday. He faces charges of sexual battery on a person over 12 years old... Olenchak's wife told police that her husband had on several occasions fondled a girl in their home, once allegedly drugging her... Olenchak has been released on bond... [Full article here]

DAVIE POLICE OFFICER ACCUSED OF RAPING WOMAN NEXT TO SLEEPING WIFE
Victim says officer's wife was present, 'looked like a zombie'
South Florida Sun Sentinel
Rafael A. Olmeda
March 27, 2009
[Excerpts] A Davie police officer has been charged with two counts of rape for allegedly attacking a woman in bed while his wife lay asleep next to them... According to the complaint, Olenchak got his wife a Crystal Light soft drink before bedtime, and she fell asleep "earlier than usual." Olenchak then got the victim something to drink. Coyne said police are investigating whether drugs were used in the drinks. The victim said that while the sexual assault was taking place, Olenchak's wife got up and went to the bathroom, but she "looked like a zombie," the report states... [Full article here]
[police officer involved domestic violence oidv intimate partner violence (IPV) abuse law enforcement public safety florida state poison child abuse incest family sex rape rapist asshole]
on 3/30/2009