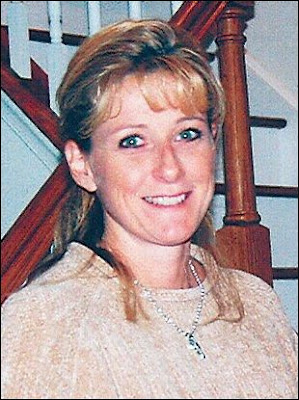 Witnesses said Barbara Vanaman told them of an assault by her police Sgt. husband during which she said he grabbed her by the throat & threw her into a wall.
Previous entries:
THIS MONTH SO FAR:

WITNESSES: VANAMAN ABUSED WIFE
Vineland Daily Journal
By TIM ZATZARINY Jr.
March 6, 2009
[Excerpts] ...Karen Klaus, assistant director of the [Creative Achievement Academy of Vineland] school, recalled a Monday morning in April 2006 when the normally composed Barbara Vanaman came into the office looking haggard and very upset. Barbara Vanaman said her husband [Millville Police Sgt. Robert Vanaman] grabbed her by the throat and slammed her into a wall after she arrived home from a class trip to the Penn Relays, a track and field event in Philadelphia the previous Friday... [Full article here]

VANAMAN TRIAL HEARING CONTINUES
The Bridgeton News - NJ.com
By JASON LADAY
jladay@sjnewsco.com
Tuesday, March 10, 2009
[Excerpts] A hearing on whether the marriage counseling records of the late Barbara Vanaman should be made public in the murder trial of Millville Police Sgt. Robert Vanaman is set to resume today... Vanaman's attorneys stated Nina Kardos, a marriage counselor who resides in Maple Shade, held two sessions with the husband and wife. However, the counselor has said it will take a court order for her to release the records of those sessions. The defense has argued the wife and mother had a history of abusive behavior toward her spouse and others, and had moved out of the family home to be with a "lover" three days before her death. It has been reported that two of Barbara Vanaman's coworkers on Thursday testified that she had stated she had been abused by her husband on at least two occasions... In addition, Barbara Vanaman's then boyfriend, identified as Joel Dugan, reportedly testified Vanaman had left their motel to go home days before her death for fear of losing her children... In addition, the upcoming trial is expected to attract some national attention, as producers from the CBS documentary and news television show "48 Hours" had last year requested interviews with both Vanaman and his attorney Joseph O'Neill... [Full article here]

JUDGE: RELEASE VANAMAN COUNSELING RECORDS
Vineland Daily Journal
By TIM ZATZARINY Jr.
March 11, 2009
[Excerpts] ...[Judge Martin] Herman on Tuesday also denied a defense request to exclude from the upcoming trial testimony by four prosecution witnesses who took the stand during a pretrial hearing last week.. A fourth witness, Vineland-based attorney Rick Tonetta, said he met with the Vanamans one day before the fatal incident to discuss their plans to divorce and, when he spoke to Barbara Vanaman privately, she recounted a separate incident in which she said her husband "put his hands on her" and pushed her... [Full article here]
[police officer involved domestic violence law enforcement fatality fatalities murder new jersey politics]
on 3/12/2009