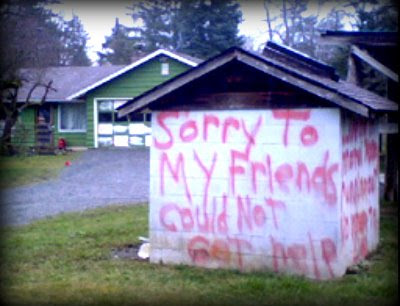 UPDATED WITH NAMES on 3/15:
The women who were killed are Barbara Nettlebeck, a King County corrections officer and her daughter Bretta Hawkins, a specialist with Renton Police Department.

...Court records indicate a divorce was under way, initiated by the wife... "We deal with this kind of thing all the time but this really hits home," police spokesperson Paul Kline said...

AXE-WIELDING MAN ACCUSED OF KILLING WIFE, INJURING STEP-DAUGHTER
KOMO
Mar 14, 2009 at 12:25 PM PDT
Updated: Mar 14, 2009 at 5:18 PM PDT
[Excerpts] ORTING, Wash. -- A man has been arrested, accused of killing his wife and critically injuring his step-daughter with an axe. A 911 call came into Pierce County's dispatch around 10:20 p.m. Friday from a man who said he had just attacked his wife and step-daughter, said Det. Ed Troyer with the Pierce County Sheriff's Department. Deputies arrived at the home in the 27200 block of 168th Ave. Ct. E to find a 52-year-old woman dead and a 33-year-old woman critically injured. The woman was rushed to Harborview Medical Center in Seattle where she was listed in critical condition. Detectives say it appears both victims were struck by an axe... "I know she served him papers for a divorce," said neighbor Lola Worrell... Court records indicate a divorce was under way, initiated by the wife. She had worked as a King County corrections officer for more than nine years. In legal papers filed last month, she said: "I may be a corrections officer, but Charles' anger and abusive behavior puts me in fear for my personal safety. He is larger in stature than me, stronger than me, and has broken windows and chairs. He has also thrown various items in our house, breaking them. His violent behavior is escalating." She also claimed he was abusing the dogs and horses on their property. Even though retraining orders were in place, the couple -- along with the woman's 33-year old daughter -- had a yard sale at the house just Friday... The husband has been booked for investigation of first degree murder and first degree assault... the stepdaughter worked for the Renton Police Department as a specialist. [Full article here]

MAN ARRESTED IN AX ATTACK THAT LEAVES WIFE DEAD, STEPDAUGHTER INJURED
Seattle Post Intelligence
By HECTOR CASTRO
Last updated March 14, 2009
[Excerpts] A Pierce County woman who was divorcing a husband she accused of domestic violence was found dead late Friday and her daughter badly hurt, both apparently bludgeoned with an ax... Detective Ed Troyer said the grisly attack was something normally seen "only in a horror film"... The 52-year-old wife was already dead. Troyer said that initially, deputies believed both women were dead, but one of the deputies noticed eye movement in the daughter and immediately called for medical aid. The woman who was killed was a King County corrections officer and her daughter a specialist with Renton police... The women wrote that on several occasions her husband treated both household pets and their farm animals with cruelty, once hitting a horse in the head with a baseball bat because, he allegedly said, it had chased one of their dogs. "He thought it was amusing, and laughed, telling me it sounded like 'hitting a home run,'" the woman wrote in her declaration for a restraining order... In a reply, the husband reported that he had mental health problems and did "not deal with stress well." He also asked the court to order his wife to pay spousal support because he was unemployed. His wife reported that her husband was intentionally remaining unemployed to avoid paying child support for a daughter he had from a previous relationship. A mutual restraining order was currently in place and a hearing in the proceedings was scheduled for Thursday... [Full article here]

WOMAN STRUCK BY AX, KILLED IN WASH.
Seattle Times
March 14, 2009 at 5:45 PM
[Excerpts] ...The Seattle Times reports that the deceased woman had worked as a King County corrections officer for more than nine years, and that her daughter has worked at the Renton Police Department for seven years doing front desk work and data entry... When police arrived at the scene they found several spraypainted messages, including "I loved my wife" and "Sorry to my friends I could not get help." [Full article here]

ORTING MAN ARRESTED IN FATAL AX ATTACK
KING 5 News
By CHRIS DANIELS
06:30 PM PDT on Saturday, March 14, 2009
[Excerpts] ...Police say the house had been spray painted with several messages, including "I loved my wife" and "Sorry to my friends I could not get help." Neighbors say the couple was going through a divorce, and the wife may have recently kicked him out of the house. "From what you can see on his house, you can tell he's definitely hurting inside," said Steve Brown. "I'm not a psychologist, so I can't say what made that in his mind decide to do what he did"... The 52-year-old victim worked at the Regional Justice Center in Kent, supervising inmates. The staff is having a tough time dealing with the news of her death. Corrections department spokesperson William Hayes released a statement saying: "It's a huge tragedy for the department. She was an excellent officer, liked by everyone." The daughter worked for the Renton Police department for seven years in a non-commissioned position doing computer and clerical work. She's described as a valuable member of the police department. "We deal with this kind of thing all the time but this really hits home," police spokesperson Paul Kline said. [Full article here]

3/15/2009 UPDATE
VICTIM IN ORTING AX ATTACK HAD FILED RESTRAINING ORDER
KING 5 News
By Tricia Manning-Smith
Sunday, March 15, 2009
[Excerpts] Authorities say a 52-year-old Orting man used an ax to kill his wife and stepdaughter... “I just want everyone to know this was such a tragedy, unforeseen by us and she was just the most wonderful person I've ever known,” said Douglas Armstrong. Armstrong worked with 52-year-old Barbara Nettlebeck as a guard for the past nine years at the Kent Regional Justice Center... [Full article here]
[police officer involved domestic violence law enforcement fatality fatalities murder washington jail]
on 3/14/2009