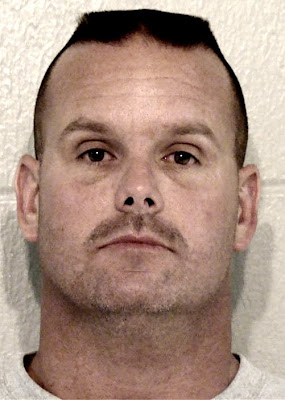 ...“She claims that Mr. Ferguson has committed violence to her in the past,” the release states. “She asked not to proceed with charges"... She had a cut on her upper lip and bruising and swelling to her forehead and nose...

OKEECHOBEE COUNTY DETENTION DEPUTY ARRESTED
Reported by: WPTV staff
Email: webteam@wptv.com
Last Update: 3/26 11:30 am
[Excerpts] Just after midnight this morning the Okeechobee County Sheriff's Office was called to the Raulerson Hospital ER for domestic dispute. The Sheriff's Office reports that the victim [AF] was in the ER [in] reference to a cut to her upper lip and she also had bruising and swelling of the forehead and nose. Ms. Ferguson told the deputy who responded that there was a domestic dispute between her and her husband, Eric Scott Ferguson. The victim claims that Eric Ferguson approached her as she lay in bed and struck her in the face with the palm of his hand causing the injuries to her face... Prior to his employment at the Okeechobee County Sheriff’s Office, Mr. Ferguson was employed with the Florida Department of Corrections from April 1989 to February 2007. [Full article here]

DETENTION DEPUTY ACCUSED OF PUNCHING WIFE
Woman Says Husband Punched Her As She Lay In Bed
WPBF
POSTED: 4:12 pm EDT March 24, 2009
[Excerpts] An Okeechobee County detention deputy has been placed on administrative leave without pay after he was arrested Tuesday, accused of punching his wife while she slept... A deputy responding to a domestic dispute call interviewed April Ferguson at an area hospital's emergency room ... [AF] said her husband had been violent with her in the past, but did not want to press charges. She had a cut on her upper lip and bruising and swelling to her forehead and nose... [Full article here]

OKEECHOBEE COUNTY DETENTION DEPUTY PLACED ON LEAVE AFTER ALLEGED BATTERY ON WIFE
Treasure Coast
By Will Greenlee
Tuesday, March 24, 2009
[Excerpt] ...“She claims that Mr. Ferguson has committed violence to her in the past,” the release states. “She asked not to proceed with charges.” Ferguson, a former state Department of Corrections employee, was arrested and taken to the county jail.He will be placed on unpaid administrative leave pending an internal investigation. [Full article here]
on 3/30/2009