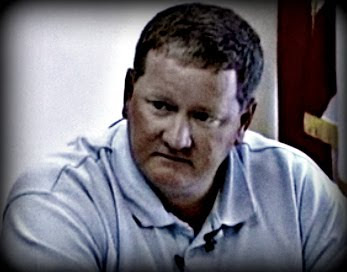 ...[Ex-Sheriff of Lawrence County] Bryan Hill and his wife Angela were arrested on domestic violence charges and authorities said this wasn't the first visit to their home... Hill was elected sheriff in 1998 but resigned amid allegations of sexual harassments in 2000. He was again elected in 2002...

FORMER LAWRENCE CO. SHERIFF ARRESTED FOR DOMESTIC VIOLENCE
WAFF
Sep 09, 2009 10:37 AM PDT
[Excerpts] The former sheriff of Lawrence County has been arrested on a domestic violence charge along with his wife. Bryan Keith Hill and his wife Angela were both charged for Domestic Violence Third Degree... Deputies say Hill and wife wife continued their altercation despite commands for them to calm down. Investigators believe alcohol was a factor in the altercation... Both spend 12 hours in custody to observe a cool-down period. Bond was set at $1,000 for both. [Full article here]

FORMER VALLEY SHERIFF AND WIFE ARRESTED
WAFF.COM
By Jeanie Powell
Posted: Sep 09, 2009 4:23 PM PDT
Updated: Sep 10, 2009 3:38 AM PDT
[Excerpts] ...Bryan Hill and his wife Angela were arrested on domestic violence charges and authorities said this wasn't the first visit to their home. Angela Hill was held in the Lawrence County Jail. The former Lawrence County Sheriff was sent to Franklin County so he wouldn't risk running into anyone from his past in law enforcement... Bryan Hill served two terms as sheriff and was working towards a third when he was defeated by Gene Mitchell in 2006... Deputies responded to a disturbance at their home and witnessed them in a verbal altercation. Both showed evidence something physical had taken place. Deputies made several efforts to defuse the situation, but Mitchell said the two continued to fight, ulimately leading to their arrests. Authorities said alcohol was a factor.... [Full article here]

FORMER SHERIFF, WIFE ARRESTED FOR DOMESTIC VIOLENCE
Times Daily
By Tom Smith
Sep 10, 2009
Thursday, September 10, 2009 at 3:30 a.m.
[Excerpts] A former Lawrence County sheriff and his wife were released from jail Wednesday afternoon after each was charged with third-degree domestic violence. Former sheriff Bryan Keith Hill, 44, and his wife, Angela Smith Hill, 41, were arrested Tuesday night, Lawrence County Sheriff Gene Mitchell said. Hill was elected sheriff in 1998 but resigned amid allegations of sexual harassments in 2000. He was again elected in 2002 and ran for re-election in 2006 but was defeated by Mitchell... He said Hill and his wife were held for 12 hours for a cool-down period before being released on bonds of $1,000 each... Third-degree domestic violence is a Class C misdemeanor punishable by up to a year in jail and a fine, if convicted. [Full article here]
[police officer involved domestic violence law enforcement alabama state hx mutual]
on 9/12/2009