[AZ] Sheriff's Corporal Porras dv charges: suspicion of criminal damage, assault and prevention of the use of 911 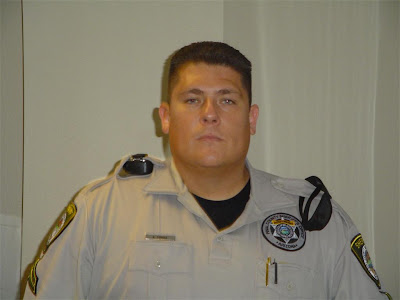 PINAL OFFICER ACCUSED OF DOMESTIC VIOLENCE
The Arizona Republic
by Jordan Johnson
Sept. 21, 2009
[Excerpts] A Pinal County Sheriff's corporal was arrested on charges of domestic violence, police said. Able Porras, a certified peace officer for more than seven years, was booked Monday into the Pinal County Adult Detention Facility on suspicion of criminal damage, assault and prevention of the use of 911... Authorities received a call Sunday night about a domestic disturbance at a San Tan Valley home. Upon the arrival of police, the victim, who was not identified, told them Porras "had struck her in the face and head and would not allow her to use the home phone to call 911," according to the press release... Porras was released without bail Monday and was ordered to appear in front of a judge at a later date... [Full article here]
[police officer involved domestic violence law enforcement arizona state]
on 9/24/2009