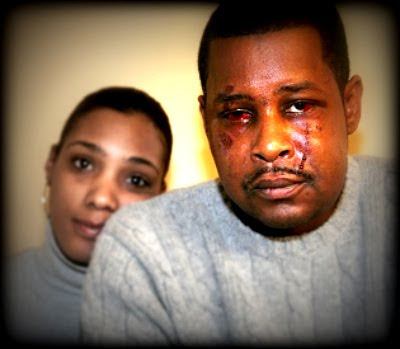 Previous post:
[MA] Firefighter Abron - "spirited argument" or battery & assault - ...A veteran Boston firefighter yesterday pleaded not guilty to charges that he beat his girlfriend before assaulting police and resisting arrest in an early-morning domestic attack that the alleged victim says never happened... The girlfriend was uncooperative and declined police and medical services... Abron had one active restraining order and several previous orders against him, but none was taken out by his girlfriend...

BEATEN FIREFIGHTER’S ACQUITTAL BOLSTERS COVER-UP CLAIM
Jessica Van Sack jvansack@bostonherald.com
Tuesday, September 22, 2009
A Boston firefighter who alleged police brutality after cops charged him with assaulting his girlfriend was acquitted yesterday after a jury trial that raised questions about a potential cover-up by the arresting officers. Boston Police Internal Affairs has been investigating whether officers Brian Dunford and David Santosuosso beat firefighter Wayne Abron and then made up a story to explain his injuries... Abron, 42, sustained an eye-socket injury and facial contusions after police were called to a loud argument in his mother’s backyard in Dorchester between him and his girlfriend on March 23, 2008. Abron’s then-girlfriend, Edwinna Wynn, a social worker, has been unwavering in insisting that Abron never touched her during their “spirited” argument and that cops tackled Abron from behind, smashing his head on the ground... [Full article here]
[public safety personnel involved domestic violence firefighter fire department massachusetts]
on 9/22/2009