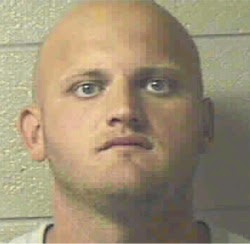 ...That lady had run from her home on Little Murray Road where she lives with Marcus Vanmeter. The Murray County Sheriff's Office says he had gotten into a domestic dispute with the woman, and now faces felony charges, including 2 counts of battery, false imprisonment, and 2 counts of interfering with a 911 call...

WHITFIELD COUNTY SHERIFF DEPUTY ARRESTED IN MURRAY COUNTY
wrcbtv.com
Aug 30, 2009 2:20 PM PDT
Updated: Aug 31, 2009 2:53 PM PDT
Monday 5pm:
[Excerpts] ...[Whitfield County Sheriff's Sgt. Marcus] Vanmeter is charged with false imprisonment, battery, and interference with a 911 call... Vanmeter has been placed on paid administrative leave pending an investigation. Sheriff Scott Chitwood calls the allegations surprising saying, "We are very disappointed any time there is a charge or accusation against a law enforcement officer, but we will deal with it as the cards are dealt to us and make a decision later on." Tonight Vanmeter is out of jail on on a $ 30,000 bond. He's been ordered to stay away from his accuser... Eyewitness News filed a formal open records request Monday to have access to Vanmeter's personnel file...
Sunday:
A Whitfield County Sheriff Deputy is behind bars. Murray County authorities confirm Marcus Teran Vanmeter was arrested Saturday... [Full article here]

JAILER JAILED IN MURRAY COUNTY
newschannel9.com
Karen Zatkulak
August 31, 2009 4:27 PM
[Excerpts] A Whitfield County Deputy is off the job tonight after he was arrested over the weekend... [Whitfield County Sheriff's Deputy Marcus] Vanmeter is charged with 2 counts of battery, 2 counts of interfering with a 911 call, and false imprisonment. It all stems from an incident at his house in Murray County on Saturday, when his employer, Sheriff Scott Chitwood says he may have made a disappointing decision. [J.W.] lives across the street and says her husband was home that night, when the victim came for help. "There was a lot of police cars up here and my husband had called me and said the lady had come up here and used his phone to call 911." That lady had run from her home on Little Murray Road where she lives with Marcus Vanmeter. The Murray County Sheriff's Office says he had gotten into a domestic dispute with the woman, and now faces felony charges, including 2 counts of battery, false imprisonment, and 2 counts of interfering with a 911 call. When the woman couldn't call authorities herself, she called on her neighbors. Wooten says, [sic] "Had broken phones, and her cell phone so she couldn't get in touch with police"... Murray County Sheriff Howard Ensley says they could not release the details in this case because it was a family violence situation. Sheriff Chitwood says he hasn't had any major problems with Vanmeter in the past. He says while it is disappointing, he doesn't want to pre-judge Vanmeter. [Full article here]
[police officer involved domestic violence law enforcement georgia state]
on 9/01/2009