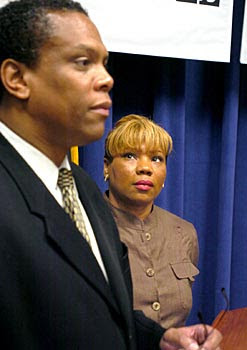 The Maryland Court of Appeals will review an appeal of a lower court ruling that threw out a wrongful termination suit filed by former Baltimore police commissioner Kevin Clarke.

Clark was fired in November 2004 by then-Mayor Martin O'Malley, who terminated the former Baltimore cop after calling a domestic dispute between Clark and his girlfriend a distraction to the city's crime-fighting efforts.

"Everything is on the table," Pettit said. "We feel confident that the court will see that the law is on our side."

The court's decision marks the latest legal chapter in a case that has made its way from the lower court to the court of appeals twice. The Baltimore City Circuit Court initially tossed the case, ruling the mayor had the right to fire a police commissioner without cause.

But Clark appealed the decision to the Court of Special Appeals, which ruled that the former commissioner was a state appointee who could not be fired without cause. The case was returned to the lower court, which again refused to hear the case.