[CA] The ex of State Prison Officer Timothy Rodriguez had "no idea" that he wanted her murdered, and is very afraid 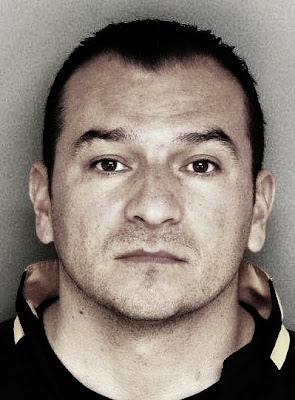 ...In the culmination of an undercover operation by law enforcement, Rodriguez was arrested on September 9 in Salinas after soliciting a murder for hire from an undercover police officer posing as a hit man... More than 20 officers worked on the investigation, some of them recording conversations as undercover agents...

TRANSCRIBED FROM VIDEO:
KION Reporter Shannon Hogan: "...Now according to the DA, the woman who was the alleged target of the murder had NO IDEA that Rodriguez would want to harm her. She HAS been talking to the DA's Office - who say she is still scared for her life..."

CALIF PRISON GUARD CHARGED IN MURDER-FOR-HIRE
San Jose Mercury News
The Associated Press
Posted: 09/17/2009 04:00:20 PM PDT
SALINAS, Calif.—A Salinas Valley State Prison guard is under arrest after police say he tried to hire a hit man to kill an ex-girlfriend. A lawyer for Timothy Rodriguez says his client will plead not guilty at his arraignment Friday on charges including attempted premeditated murder, solicitation for murder and possession of a silencer. Rodriguez, who was arrested last week, is being held on $2 million bail. According to prosecutors, the 38-year-old guard tried to solicit an undercover police officer who was posing as a hit man. They say they have a recorded conversation as evidence. Rodriguez's attorney, Miguel Hernandez, disputes the charges and says his client is a "decent guy with no criminal background." If convicted, Rodriguez faces life in prison. [LINK]

SALINAS CORRECTION OFFICER CHARGED FOR HIRING A HIT MAN
KCBA
Posted: Sep 15, 2009 05:12 PM
Updated: Sep 17, 2009 09:23 AM
[Excerpts] Timothy Rodriguez, a 38- year-old correctional officer employed by Salinas Valley State Prison, has been charged with attempted premeditated murder, solicitation of murder, and possession of a silencer in a complaint filed on September 11, 2009. In the culmination of an undercover operation by law enforcement, Rodriguez was arrested on September 9 in Salinas after soliciting a murder for hire from an undercover police officer posing as a hit man. The case was investigated by Internal Affairs Special Agents for the Department of Corrections and Rehabilitation. It took almost a week to build the case against a corrections officers accused of trying to hire a hit man... The department of corrections started a massive investigation into Timothy Rodriguez September 3rd... More than 20 officers worked on the investigation, some of them recording conversations as undercover agents, "There were a lot of preparations made to accomplish the attempted murder," said [Assistant District Attorney Berkley] Brannon... Right now Rodriguez is being held on 2 million dollars bail, and is scheduled to be in court on Friday. If convicted he could spend life in prison. [Full article here]

OFFICIALS: CDCR CORRECTIONAL OFFICER CHARGED WITH ATTEMPTED PREMEDITATED MURDER AFTER HIRING UNDERCOVER COP POSING AS HIT MAN
By Kimber Solana ksolana@thecalifornian.com
September 16, 2009
[Excerpts] ... Officials could not provide other information Tuesday night, including the law enforcement agency that made the arrest, where in Salinas it occurred and any information regarding the intended target of the attempted premeditated murder of which Rodriguez is accused. "We have an ethical duty to protect [Rodriguez's] right to a fair trial," [Assistant District Attorney Stephanie] Hulsey said referring to lack of detailed information provided. Michele Kane, a state Department of Corrections and Rehabilitation spokeswoman, said Rodriguez is on leave from work. Kane could not provide information on how long Rodriguez has worked at the prison and whether his leave was paid... [Full article here]
[police officer involved domestic violence law enforcement fatality fatalities murder plot california prison jail]
on 9/17/2009