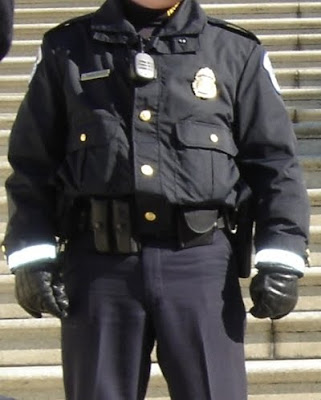 ...The proposed “bright line” policy would be one of the toughest in the nation and has riled at least one national union... Basically, it says cops found to be lying won’t be cops anymore. No warnings. No suspensions. One lie and you’re out... the penalty for any police officer caught lying verbally or in a written report while working on the force would be termination... although the commissioner has the right to fire officers for lying, it has not been “past practice” to do so...

I have filed this under general accountability.

BPD boss to cops: Tell truth or face consequences
Herald Exclusive, Boston Herald
By Jessica Fargen and Peter Gelzini
Sunday, September 27, 2009
[Excerpts] Vowing to bolster his department’s legitimacy in the eyes of the public, Boston Police Commissioner Edward F. Davis is finalizing a new policy that allows him to fire any cop caught lying in the line of duty... Anyone caught lying on the job “is unable to perform significant responsibilities as a police officer,” Davis said. “I think the public needs to understand we take this seriously so that the level of trust in the department and the legitimacy of the department are improved.” The proposed “bright line” policy would be one of the toughest in the nation and has riled at least one national union. Nonetheless, Davis said the effort has passed the city’s legal review and he hopes to implement it as soon as possible. “It’s the right thing to do,” said Davis, who underscored that the policy would be a one-strike-and-you’re-out approach. “It’s a hard process to implement,” he added. Under the rule, which is now being reviewed by Boston police unions, the penalty for any police officer caught lying verbally or in a written report while working on the force would be termination, Davis said. He said the firing would come only after an Internal Affairs probe determined that the officer lied... Peter Manning, Brooks professor of criminal justice at Northeastern University, called Davis’ plan to fire police officers for lying “very unusual,” but admirable. It’s a departure from the status quo at the BPD, in which police who lie receive “modest” suspensions, not always with loss of pay, he said. But Davis’ plan is likely not practical in a union-dominated police culture that shuns internal written rules, Manning said. “It’s worthwhile exploring it, but I think it’s highly unlikely that something will go forward from it,” said Manning, who has written articles on police and lying. “I’d be extremely surprised if this were in any way acceptable to the unions.” Indeed, one national police labor union slammed the idea. “It’s a cop-out to suggest that there’s nothing they can do about it but fire people,” said Jim Pasco, executive director of the National Fraternal Order of Police, a union representing 327,000 officers and 2,300 local unions... [Full article here]

Policing the police is ‘the right thing to do’
Boston Herald
Peter Gelzini, Columnist
Sunday, September 27, 2009
In theory, it has been defined as all that stands between us and chaos. In practice, “The Thin Blue Line” has come to represent that mythical barrier, a kind of DMZ separating the police culture from the larger, often indifferent, “civilian” world. And it’s in this shadowy void that truth can often become the first casualty of the so-called Thin Blue Line. Cops lying to cover for other cops... The Thin Blue Line has provided cover for some cops to bend the truth, to get “creative” with a report in order to make a case, or to take the stand and engage in what’s known as “testilying.” On Friday, Boston Police Commissioner Ed Davis talked about an antidote to The Thin Blue Line. He called it “The Bright Line Rule.” Basically, it says cops found to be lying won’t be cops anymore. No warnings. No suspensions. One lie and you’re out... Why? Because, he said, “Having a police department that is legitimate in the eyes of the community is what gives us the ability to perform our job”... The one question Ed Davis could not answer is why it took so long for the Boston Police Department to formalize truth-telling inside our thin blue line. “I can’t speak to why the issue of (police) truthfulness never got to this point before,” Ed Davis said, “but it is here now, and all I can tell you is that in my mind it’s the right thing to do.” [Full article here]

UNION DOWNPLAYS BPD LIAR POLICY
Boston Herald
By Jessica Van Sack and Jessica Fargen
Monday, September 28, 2009
Hub patrolmen’s union president Thomas Nee lashed out at BPD Commissioner Edward Davis yesterday, belittling as “smoke and mirrors” Davis’ new push for a formal policy permitting the department to fire cops caught lying on the job. “Of course he can fire proven liars,” Nee said. “I’m not gonna protect liars.” Nee said he would continue to demand “due process” for any BPD officers investigated for lies in the line of duty. Nee spoke after the Sunday Herald reported that Davis and the city are putting the final touches on a “one strike and you’re out” policy for cops found guilty of lying verbally or in writing by the BPD’s Internal Affairs division... “It’s appropriate to implement a rule that’s very specific about truthfulness and cooperation on internal investigations,” he said... His spokeswoman Elaine Driscoll added yesterday although the commissioner has the right to fire officers for lying, it has not been “past practice” to do so. She said Davis wants cops to have fair warning such matters will be handled formally going forward. Nee also assailed Davis for saying a well-articulated anti-lying policy is needed to help bolster the “legitimacy” of a BPD roiled by scandals... “Shame on the commissioner’s choice of words, for raising the question of an illegitimate police department,” Nee said... Civil liberties lawyer Harvey A. Silverglate applauded Davis’ plan. “The new policy is a welcome breath of fresh air,” he said. “What strikes me is how many hoops have to be jumped through to establish the simple notion that lying during the course of official police duty is a firing offense.” [Full article here]
hero noble
on 9/28/2009