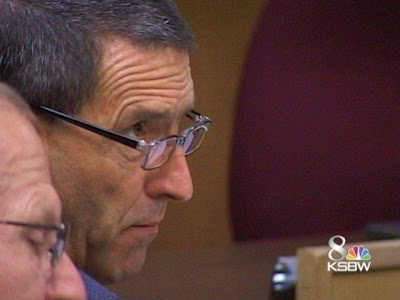 ...Prosecuting attorney Patrick Palacios says [former San Benito County sheriff's Sgt. Michael "Mike"] Rodrigues is a man who preys on the weak... The questioning came to a point where the defense asked why she [3rd suspected victim] had moved in with the man who previously sexually assaulted her. She responded by saying: "Because I'm stupid. Because I needed that job badly."

FIRST SUSPECTED RAPE VICTIM TAKES THE STAND
Hollister Free Lance
By Colin McConville
Sep 9, 2009
[Excerpts] The case against former San Benito County sheriff's Sgt. Michael Rodrigues began today in San Benito County Superior Court after jury selection was completed Tuesday. Opening statements have already concluded, and the prosecution has called its first two witnesses. Rodrigues is charged with raping four women, stemming from incidents that allegedly began in the spring of 1999... The trial is being heard by visiting Monterey County Judge Alan Hedegard. After relatively short opening statements, the prosecution called its first witness, one of the suspected rape victims... During the cross examination, the defense questioned whether there was any consent during the suspected rape when things escalated... In summarizing each victim's case, [Prosecuting attorney Patrick] Palacios talked about how Rodrigues would "find" his victims... For the defense's opening statement, attorney Art Cantu attempted to discount many of the stories of the suspected victims by pointing out inconsistencies... When Cantu got to the last suspected victim, he discredited her story... [Full article here]

FORMER SAN BENITO COUNTY DEPUTY ON TRIAL FOR RAPE
kionrightnow.com
Posted: Sep 9, 2009 08:41 PM
Updated: Sep 10, 2009 08:17 AM
[Excerpts] ...Rodrigues's ex wife was the first witness to take the stand, she says her ex husband raped her after she begged him to stop. Another alleged victim testified this afternoon, claiming she was raped by the former sergeant... Prosecuting attorney Patrick Palacios says Mr. Rodrigues is a man who preys on the weak... [Full article here]

TRIAL FOR EX-DEPUTY ACCUSED OF RAPE STARTS
Ex-Wife Testifies At Trial Of Former San Benito County Deputy
KSBW
POSTED: 12:48 pm PDT September 9, 2009
UPDATED: 6:13 am PDT September 10, 2009
[Excerpts] ...The ex-wife of Mike Rodrigues, who is accused of raping four women, was the first person to take the stand during the former sheriff deputy's trial. Rodrigues has been charged with eight felonies, including three counts of forcible rape, two counts of unlawful sexual penetration and one count of attempted rape, domestic violence and spousal rape. In his opening statement, Rodrigues' attorney, Art Cantu, said the allegations are false and the alleged victims cried rape only after falling in love with Rodriguez. Prosecutors, however, said Rodrigues was a predator who preyed on vulnerable women... [Full article here]

FORMER RODRIGUES COLLEAGUE RECALLS SUSPECTED HOTEL INCIDENT
The Gilroy Dispatch
By Kollin Kosmicki
Sep 11, 2009
[Excerpts] A former sheriff's office colleague of Michael Rodrigues, accused of raping four women, testified this morning that the suspect attempted to assault a woman in a hotel room while in Laughlin, Nev... John Klauer was on the stand today and described the trip in May 2004. He testified that he and Rodrigues had shared a hotel room and went out drinking one of the nights. He said he was awoken by Rodrigues and a woman in the room... Klauer testified he still was turned in the opposite direction and that he heard her say such phrases as "No, stop," and that she became gradually louder and louder... Klauer testified the woman shifted around to avoid Rodrigues' efforts and that he heard her say, "No, stop - leave me alone." That is when Klauer recalled Rodrigues telling him, "Come over here and hold this (expletive) down for me." Klauer said he then grabbed Rodrigues and held him against the wall, telling him to get her out of the room. "He grabbed her and threw her out of the room," said Klauer, adding how she had been naked... Klauer described how he reported the incident to former sheriff's Sgt. Wes Walker a couple of weeks later in 2004 and he confirmed that the next time local investigators picked up on the matter was during their probe in the summer of 2007... Klauer also confirmed there was surveillance involved and it included some surveillance while Rodrigues - Klauer's supervisor at the time in the sheriff's office, where they spent 20 years working together - was on duty... Attorneys began direct and cross examination of the fourth suspected victim, identified as Jane Doe 1, in the afternoon today. She testified that Rodrigues sexually assaulted her on two occasions... "I was telling him not to. I didn't want it. It's like he was not listening to a thing I was saying"... The second suspected incident with the same woman was several months later... Deputy District Attorney Patrick Palacios asked why she had not reported the incidents or other times she said he had allegedly, angrily showed up to her house - another party reported it to authorities - and she responded, "Because I didn't want to embarrass him in front of his friends"... During the morning session of the trial, the prosecution had called the third suspected victim... she was left with two weeks of abdominal and vaginal pain... [Defense Attorney Art] Cantu followed the testimony with a cross examination focusing largely on how the two were dating after she had been raped... The questioning came to a point where the defense asked why she had moved in with the man who previously sexually assaulted her. She responded by saying: "Because I'm stupid. Because I needed that job badly." [Full article here]
[police officer involved domestic violence law enforcement california multiple repeated hx brutal serial rapist]
on 9/13/2009