[NH] The "infatuation" of Ms. Halsey-Carter for unnamed police officer thought to be behind night-time fire set outside of his home 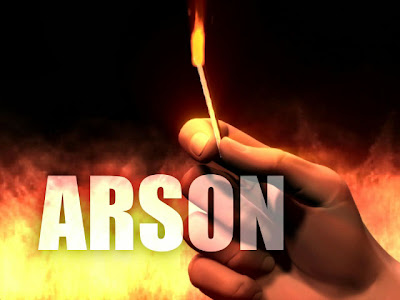 ...They said items gathered from the crime scene and her apartment helped lead to her arrest. "That evidence, we believe, was significant," [Police Cpt. William] Clary said. "So much so that we haven't had a chance to go through it all"...

POLICE: WOMAN TRIED TO BURN OFFICER'S HOME
New Hampshire Union Leader
By PAT GROSSMITH
September 17, 2009
[Excerpts] LACONIA – A local woman, obsessed with a police officer, tried to burn down his home while he and his family were asleep inside, according to police. The officer, who police declined to identify, had a restraining order against the accused, Patricia M. Halsey-Carter, 41, of 33 Avery St., Apt. C, after she stalked him for several months, according to Capt. William Clary. Clary said the officer previously arrested Halsey-Carter and had taken complaints from her. However, Clary said the officer had no personal relationship with her. He characterized the case as one of obsession on the part of Halsey-Carter... Clary said evidence police collected at the scene led to Halsey-Carter but he declined to say what that was. He said it took investigators 1 1/2 weeks to develop enough evidence to obtain warrants. Affidavits in the case were sealed in Laconia District Court, however, because Clary said the investigation is ongoing and officers need to review all the evidence gathered. [LINK]

WOMAN CHARGED WITH SETTING FIRE OUTSIDE OFFICER'S HOME Police Say Woman Had Infatuation With Officer
WMUR
September 17, 2009
[Excerpts] LACONIA, N.H. -- A Laconia woman has been charged with setting fire to a trash can outside a police officer's home. Police said Patricia Halsey-Carter lit a trash can on fire outside the officer's garage earlier this month. The garage is connected to a house where the officer was sleeping with his wife and a child. Police said Halsey-Carter had an infatuation with the officer. "We always think about it, but unfortunately, this officer had to live it," said Capt. William Clary. Investigators said her love for the officer appears to have blossomed last year when he was booking her on a charge of harassing her former boss, a charge that has since been dropped. In the following months, her activity led the officer to seek a restraining order. He wrote that she asked him out to coffee, left Hershey's Kisses outside his house and left him a package of perfume on his doorstep at Christmas. Investigators said they went through a list of possible suspects after the fire was set before narrowing it down to Halsey-Carter. They said items gathered from the crime scene and her apartment helped lead to her arrest. "That evidence, we believe, was significant," Clary said. "So much so that we haven't had a chance to go through it all." Police said they're taking steps to prosecute the case fairly and making sure the officer at the center of the case isn't involved in the investigation. [LINK]
[police officer involved domestic violence law enforcement stalk* woman female officer victim new hampshire]
on 9/17/2009