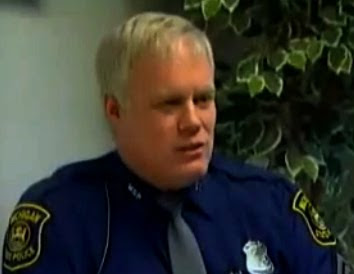 ...Retired troopers told of a July 23, 1987, incident in which [1st wife] Starr Ann Holbrook shot at him with a state police-issued gun as he arrived home from work... [2nd wife] Joni Holbrook's attorney Jesse Williams says this is not a coincidence...

THERE IS NEW INFORMATION INTO THE SHOOTING DEATH OF A MICHIGAN STATE POLICE SERGEANT.
upnorthlive.com
By Roxanne Werly
Friday, September 25, 2009 at 2:42 p.m.
[Excerpts] The incident report obtained by 7 & 4 news reveals Michigan Police Sergeant Melvin Holbrook's ex-wife shot at him twice in 1987. No one was hurt in the 1987 shooting and according to the report the sergeant did not want to press charges. The couple divorced in 1992 and Holbrook remarried in 1999. In August Sergeant Holbrook was shot and killed at his Benzie County home. Joni Holbrook has admitted to shooting and killing her husband... Joni Holbrook's attorney Jesse Williams says this is not a coincidence. He says he's concerned why charges weren't filed when the first shooting took place and concerned with the lack of an investigation. Williams says had it been investigated properly his client, Joni Holbrook, would not be in the situation that she is in today... [Full article here]

HOLBROOK PROBE REVEALS 1987 SHOOTING Police seargent's then-wife allegedly shot at him twice
BY ART BUKOWSKI
abukowski@record-eagle.com
Published: September 25, 2009
[Excerpts] In July 1987, the then-wife of Michigan State Police Sgt. Melvin Holbrook turned his service weapon on him and fired two shots, an incident that preceded by two decades Holbrook's shooting death, allegedly by another wife. Details of the 1987 shooting in Branch County emerged from police interviews and document searches during a probe of Joni Holbrook, who's accused of shooting Melvin Holbrook to death as he slept early Aug. 10... Melvin Holbrook was not injured in the 1987 incident, and his then-wife, Starr Ann Holbrook, was not charged with a crime. Police investigating Holbrook's death contacted several former staffers at the state police post in Coldwater, where Holbrook, 53, served after graduating from police recruit school in 1986. Retired troopers told of a July 23, 1987, incident in which Starr Ann Holbrook shot at him with a state police-issued gun as he arrived home from work. The couple was separated at the time, reports indicate, and Starr was at his Coldwater residence. Melvin Holbrook arrived home shortly before 11 p.m., according to a supplement he filed with the original 1987 police report. As he was in the driveway emerging from his car, he saw his wife step outside with his service revolver. She shot and hit the driveway seconds after he got back in his car and backed up, according to the report... She fired a second time as he drove away and headed back to the post to report the incident. He didn't request criminal charges... Starr Holbrook recently acknowledged to a Benzie County Sheriff's investigator that she was involved in the incident... A retired trooper told investigators "it was clear from statements made by (Melvin) Holbrook that his wife had become upset upon finding out" he had been dating another state police trooper. [Full article here]